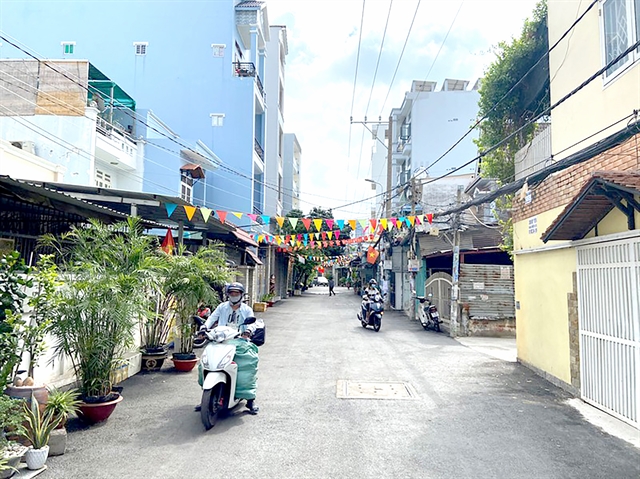 HCM CITY — Narrow alleyways have been renovated and expanded with land contributions from residents in HCM City’s District 7.

At the inauguration ceremony on Tuesday, local residents were overjoyed at the sight of the newly-upgraded Alley no. 1205 on Huỳnh Tấn Phát Street.

Nguyễn Thế Cường, a resident in the area, said: “Construction of bridges and routes inside the alley is now finished, and there are no more traffic jams.

“Now ambulances and fire engines can go right up to each door in the neighbourhood. I’m very happy that our living environment has become more spacious and modern,” said Cường.

It is thanks to numerous residents in the area, who willingly contributed parts of their own land to this community renovation project.

On the same street, Alley no. 749 has also been recently expanded from two metres in width to four-and-a-half metres.

Trần Đăng Mẫn, a resident, told Pháp Luật (Law) online newspaper: “My family has donated parts of land to the local authorities multiple times to renovate the alley. We all agree to contribute to a spacious environment for our community.

“We’re glad that from now on, garbage trucks, taxis and ambulances can reach every household here, and the drainage system is also finished,” said Mẫn.

According to Lê Văn Thành, vice chairman of District 7 People’s Committee, the district has mobilised all social resources for the renovation project of three bridges in the area.

It costs a total of VNĐ11 billion (US$480,884) from socialised funding, and addresses traffic safety issues of more than 1,400 households in the neighbourhood.

Previously, 11 main alleyways were renovated to measure four metres in width, improving the traffic flow through the locality.

All of these projects have received contributions from 175 households who donated a total of more than 2,200 square metres of land, which is estimated at over VNĐ74 billion (US$3.2 million)

Thành said: “This result is all thanks to the determination and willing participation of the whole system, from the district to the wards and the people.”

The local authorities have actively advocated the benefits the project can bring to the community, as well as each family and individual who call the neighbourhood home. Their unity and contributions have played a key role in the success of the renovation projects.

The district’s administration central square will also be renovated in the near future after a design contest is held. — VnExpress News

Previous USAID, UNICEF provide $1mln in COVID-19 supplies to Việt Nam
Next FPT to pay cash dividend at 40 per cent