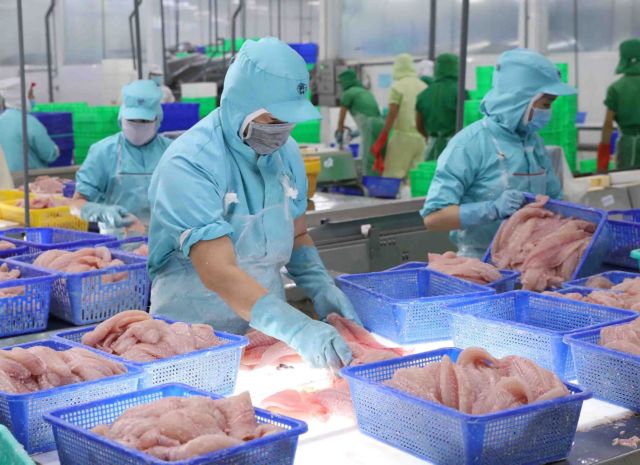 Processing tra fish for exports at a factory in the southern province of An Giang. Việt Nam has set a seafood export target for this year of $9 billion. VNA/VNS Photo Vũ Sinh

HCM CITY — Socio-economic recovery and development have been seen in HCM City – the biggest economic hub in southern Việt Nam, with strong growth in production and business activities.

Strong rises were seen in many sectors, including processing-manufacturing at 44.8 per cent and rubber and plastic product production 33.1 per cent.

A representative from the city Department of Industry and Trade said that trade and service activities in the city started to recover from several months ago. Despite the strong increase in petrol price, local firms have struggled to overcome difficulties from the rise in material prices towards recovery and development, said the representative.

Local firms attributed the increase to recovery in the number of tourist arrivals after the Government decided to fully open the tourism sector from March, especially during the 31st Southeast Asian Games, and the increase in wedding party bookings. Meanwhile, the expansion of online shopping as well as development of logistics technologies have bolstered trade activities.

HCM City’s exports were up 7.9 per cent in the first five months of the year to $20.7 billion, according to its Statistics Office.

Exports of industrial products rose by 11 per cent to more than $12.6 billion, accounting for 74.9 per cent of total exports.

China remained the city’s largest market, buying nearly $4.37 billion of its exports, up 10.6 per cent year-on-year.

It was followed by the US and Japan at nearly $3 billion and $1.1 billion.

A number of exporters have reported they have orders for until the end of the year.

Experts said global inventories are currently at very low levels, while demand has gradually recovered after a long time of stagnation due to the impact of the pandemic.

Orders have continued to increase, and exporters are now concerned because raw material prices and freight rates remain high, they added.

Similarly, garment and textile firms have orders for the whole year and are actively producing to fulfil them. — VNS