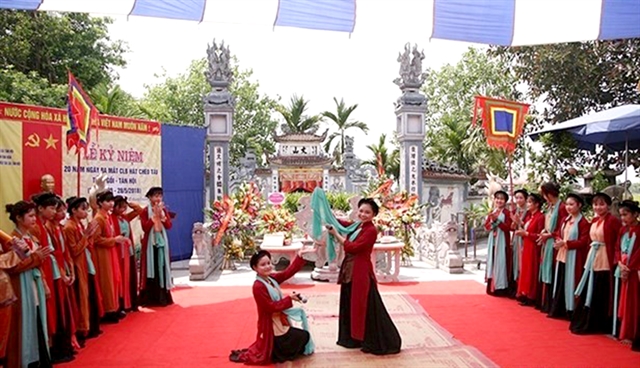 HÀ NỘI — Hà Nội is mobilising all social resources and moving full speed ahead to promote and preserve the values of the capital city’s intangible cultural heritage.

The plan issued by the city’s People’s Committee aims to create a strong change in awareness among officials and people, mobilise community resources in protecting and promoting the city’s strong traditions.

The municipal Department of Culture and Sports has been assigned to closely coordinate with relevant agencies, local authorities, and communities in taking all measures to preserve the heritage in the city.

Dissemination campaigns will be launched to introduce the heritage values to both Vietnamese and foreign visitors, contributing to enhancing the community’s awareness of the work.

Specifically, from now to 2025, Hà Nội will compile scientific dossiers to submit to the Ministry of Culture, Sports and Tourism seeking inscription of them on the list of National Intangible Cultural Heritage.

It will develop publications introducing cultural heritage, as well as organise basic and advanced training courses on performance and practice skills of typical and endangered traditions.

Festivals and cultural activities will be held to exchange and introduce the city’s intangible cultural heritages to the audience along with policies for the capital’s many artists.

The city will encourage and facilitate the collection and introduction of these traditions by both organisations and individuals.

For items already included in the List of National Intangible Cultural Heritage, the city will develop plans and organise the implementation of measures to protect and promote their values; and prioritise resources for those in danger of extinction.

Hà Nội will also focus on researching, collecting, and documentation of heritages and at the same time restore and support teaching and practice of them.

The city will promote socialisation of resources to preserve and promote their value by attracting the attention and support of organisations, individuals, and businesses in the field.

With 1,793 intangible cultural heritages, including three UNESCO-recognised Intangible Cultural Heritages of Humanity, the capital city is among the localities with the richest traditions in Việt Nam. — VnExpress News