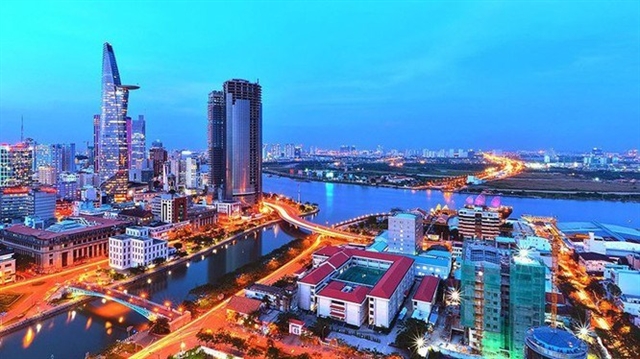 A view of HCM City’s financial district. A recent report from HSBC has adjusted Việt Nam inflation forecast from 2.7 per cent to 3 per cent. — VNA/VnExpress News Photo

HÀ NỘI — In a recent report, HSBC adjusted its prediction for Việt Nam’s inflation this year from 2.7 per cent to 3 per cent, a slight increase but with negligible risk as the economy has shown signs of a strong rebound in the making.

While the number of cases has continued to climb since before Tết (Lunar New Year), the Government has so far refused to reimpose stringent social and mobility restrictions.

“Policymakers have made clear that they intend to stick with the new strategy of living together with the virus thanks to the success of the country’s mass vaccination programme. This has resulted in higher confidence among consumers and more robust economical activities in the domestic market,” said the report.

Retail has recorded a positive 1.3 per cent in growth year-on-year in January alone after losing nearly 4 per cent in 2021. While the 1.3 per cent figure may not appear as impressive, it should be taken into consideration that January 2021’s number was especially high because 2021’s Tết fell in early February, giving retail a huge demand boost during the entire month.

Firms have been able to address labour shortage issues with most vacant positions filled after the holidays, setting the stage for an economic recovery. In addition, the country’s manufacturing PMI last month recorded the largest gain in the last nine months, showing a fast rebound of the industrial sector with a vast majority of indicators pointing to a strong possibility of achieving pre-pandemic industrial production levels. Despite a slight uptick in inflation, the price for foodstuffs remained stable due to weak demand, said the report.

“A small increase in inflation (from 2.7 per cent to 3 per cent) for 2022 in our forecast indicates negligible risk for the State Bank of Vietnam as it remained significantly lower than the government’s inflation target (4 per cent),” said HSBC researchers.

“This is especially true while put in comparison with inflation forecasts for ASEAN economies such as Thailand and Singapore, where higher inflation has started to raise concerns.”, they said.

Nguyễn Bá Minh, head of the Institute of Economics – Finance under the Academy of Finance in Hà Nội, said inflationary pressure is likely to stay moderate throughout 2022 as the global economy slowly recovers while dealing with a disrupted supply chain as a result of the pandemic.

However, checking the spread of the virus still remains a top priority for the Government to ensure economic recovery, a stable macroeconomic environment and effective inflation control.

The Government, in the meantime, must tighten control over prices of key commodities to support the business sector as a whole as well as consumers, especially petro products.

A Viet Dragon Securities’ report said the biggest threat is likely inflation due to increases in the prices of imports as the economy continues to rely heavily on imports of raw materials, up to 37 per cent of overall material cost according to the Ministry of Planning and Investment. — VnExpress News