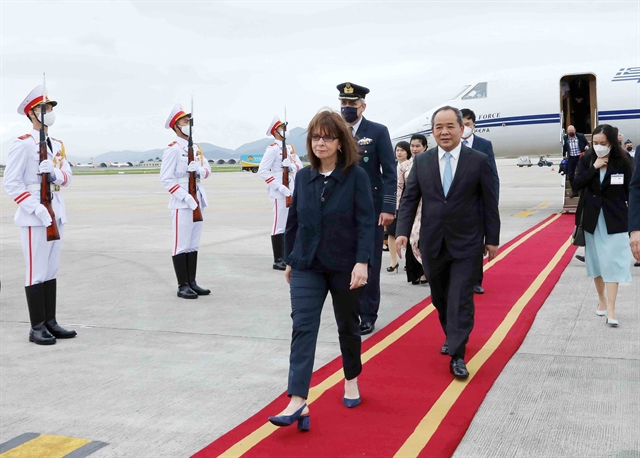 Within the framework of the five-day visit, the Greek President will visit the Monument to Heroic Martyrs and Hồ Chí Minh Mausoleum, hold talks with President Nguyễn Xuân Phúc, pay a courtesy visit to Party General Secretary Nguyễn Phú Trọng, and meet with Chairman of the National Assembly Vương Đình Huệ.

She will also attend a document signing ceremony and meet with the press, visit the Temple of Literature and attend some local events.

The visit is expected to contribute to consolidating political trust and deepening the multi-faceted cooperation between the two countries.

The visit takes place in the context that the traditional friendship is developing fruitfully, with conversations and meetings between the two countries’ leaders maintained despite the impacts of the COVID-19 pandemic.

Despite having to address a public-debt crisis with a range of political, economic and social issues, along with the migration crisis, Greece has placed importance on its relations with Việt Nam.

Two-way trade has grown rapidly over the past five years, surpassing US$446 million in 2021, up 33 per cent year-on-year. Notably, Việt Nam’s exports to Greece have expanded strongly and the country has always run a large trade surplus with Greece.

Việt Nam mainly ships footwear, garments-textiles, and aquatic and timber products to Greece. It is noteworthy that from 2013, Việt Nam’s mobile phone exports to the Southeast European nation rose significantly, from $73.9 million in 2014 to $116 million in 2020.

The country imports a small volume of paper and paperboard, and materials for tobacco production from Greece.

In development cooperation, Greece has provided aid for ethnic minority groups, flood victims, people with disabilities and Agent Orange (AO)/dioxin victims in Việt Nam, through building a US$200,000 school in the central province of Thừa Thiên-Huế, donating $100,000 to the fund for AO victims, and presenting 100 wheelchairs to local disabled people, among other activities.

Greece is one of the first EU countries to ratify the EU-Việt Nam Investment Protection Agreement (EVIPA) and back Việt Nam’s candidacy for membership of the UN Human Rights Council for 2023-2025. – VnExpress News