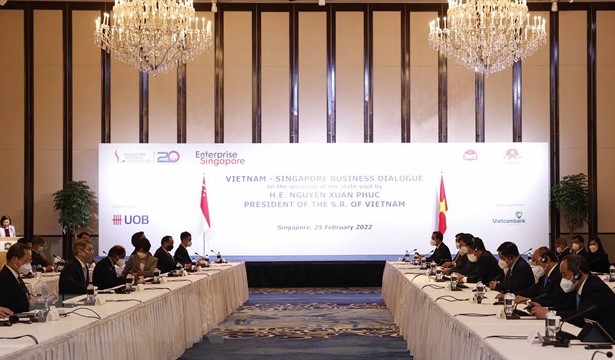 An overview of the Vietnam-Singapore business dialogue. VNA Photo

SINGAPORE– Vietnamese and Singaporean businesses signed cooperation deals worth nearly US$11 billion at the Vietnam-Singapore business dialogue on February 25, which was attended by President Nguyễn Xuân Phúc.

Speaking at the event, which drew more than 100 businesses in different sectors of the two countries, President Phúc said he hoped the deals would be realised early, and urged both Vietnamese and Singaporean enterprises to take practical actions to contribute to the growth of bilateral relations, especially when the two sides celebrate their 50th diplomatic ties and 10 years of strategic partnership in 2023.

Underlining the role of businesses in implementing the two countries’ cooperation strategies, President Phúc pledged that Việt Nam would always create optimal conditions for enterprises of both sides to develop their partnership by improving its business environment, increasing transparency and dealing with problems in logistics, land and human resources.

The State leader said that Việt Nam was rolling out measures to speed up economic recovery with the targets of 7 per cent of economic growth in 2022 and an inflation rate of under 5 per cent. From now to 2025, the country aimed for an average GDP growth of 6.5-7 per cent per year, with the digital economy accounting for 20 per cent of the GDP, he said, stating that this would be a good chance for Singaporean firms to increase investment in Việt Nam.

Việt Nam would prioritise FDI projects that use high technology, help Vietnamese firms to engage deeper into the value chains and contribute to promoting the digital economy as well as sustainable growth of Việt Nam, he said.

Phúc advised Vietnamese and Singaporean firms to focus on collaborating in prioritised areas such as high technology, digital transformation and innovation, while fostering economic connectivity within the ASEAN and in the region, and making the best use of the Comprehensive and Progressive Agreement for Trans-Pacific Partnership (CPTPP) and the Regional Comprehensive Economic Partnership (RCEP).

The President said that Việt Nam and Singapore encouraged the connection of the two economies through digital platforms, which had been reflected in the signing of cooperation deals between ministries and sectors of both sides during his ongoing Singaporean visit.

He added that he hoped more Vietnam-Singapore Industrial Parks (VISIP) would be built across Việt Nam.

Singapore’s Minister for Manpower Tan See Leng said that Singaporean firms were growing strongly in Hà Nội and Hồ Chí Minh City and expanding their business in other localities such as Vĩnh Phúc, Quảng Ninh and Bình Dương.

He said that he and Vietnamese Minister of Industry and Trade Nguyễn Hồng Diên had agreed on cooperation orientations in various fields, including digital economy, energy, digital certification in food production, and agriculture.

At the event, SOVICO Group and Keppel Group, and their subsidiaries of Keppel Land, Keppel Urban Solutions exchanged documents on their cooperation agreement worth US$1.5 billion in developing sustainable energy and urbanisation solutions. SOVICO and Keppel Energy Ventures also exchanged documents for a US$1.5 billion deal on developing comprehensively sustainable energy solutions for transition to a green economy and reduction of carbon emissions.

Besides, SOVICO, Vietjet Air and Changi Group reached a US$1.5 billion deal on providing aviation services in Vietnamese airports. Vietjet Air and ST Engineering of Singapore also inked a contract on the supply of technical services and airplane equipment worth US$150 million.

Meanwhile, T&T Group signed an MoU with YCH Group of Singapore on studying a logistics project in Cần Giuộc District of Long An Province.

At the same time, TH Group and HAO Mart, the leading supermarket chain in Singapore, also inked an MoU on strategic cooperation in selling and promoting clean milk and farm produce of TH in Singapore. – VNA/VnExpress News