Four youngsters ready to step up to senior level 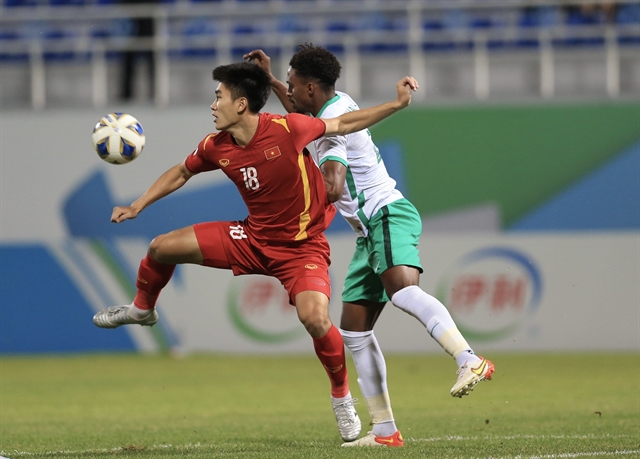 Nhâm Mạnh Dũng has staked his claim for a place in the senior national team. Photo thanhnien.vn

Losing always stings, but Việt Nam can walk away from the AFC U23 Asian Cup with hope.

While the youngsters were knocked out at the quarter-final stage by Saudi Arabia on Sunday, it’s not their run to the knockout stage that has me excited.

Being placed in a group with two other Southeast Asian sides meant Việt Nam always stood a good chance of going through, so I don’t think making it to the quarters was entirely unexpected.

Instead, it’s the emergence of several promising players that bodes well for the future.

Underage tournaments are ostensibly about developing youngsters for taking spots in the senior national team and I think the squad that travelled to Uzbekistan has a few members worthy of playing alongside Nguyễn Quang Hải et al.

Việt Nam’s senior team are pretty stacked when it comes to centre backs, but Bùi Hoàng Việt Anh and Nguyễn Thanh Bình two players have staked a claim for a bigger role.

At both the AFC U23 tournament and the SEA Games, Anh and Bình marshalled a solid defence that kept their team in every game.

Experience does count for a lot in defence but there is a case to be made for giving youth a chance, especially with Bùi Tiến Dũng’s continuing injury issues and Quế Ngọc Hải’s run of poor form.

They say you don’t have to be mad to be a goalkeeper but it helps, and Quan Văn Chuẩn certainly demonstrated a moment of madness on Sunday night.

The Hà Nội FC stopper’s rush of blood to the head in the second half led to him receiving his marching orders, but that mistake doesn’t take away from a solid tournament.

While at a shade under six feet [1,81m] tall he lacks ideal size, he did have a solid tournament overall and with the senior goalkeeping situation relatively unstable, it couldn’t hurt to give Chuẩn a chance to stake his claim.

With Đặng Văn Lâm warming the bench at club level and Bùi Tấn Trường getting up there in age, youngsters like Chuẩn and Nguyễn Văn Toàn have a real opportunity to grab the number one jersey.

First though for Chuẩn, he’ll have to unseat Trườnng at Hà Nội.

Nhâm Mạnh Dũng has already proved he can deliver in the big moments at underage level, so is he ready to lead the line for coach Park Hang-seo.

Probably not, seeing as Nguyễn Tiến Linh and Nguyễn Văn Toàn stand in his way, but Dũng could be a very useful player to call off the bench.

All you need to do is look back at his SEA Games final winner to see his talent. VNS