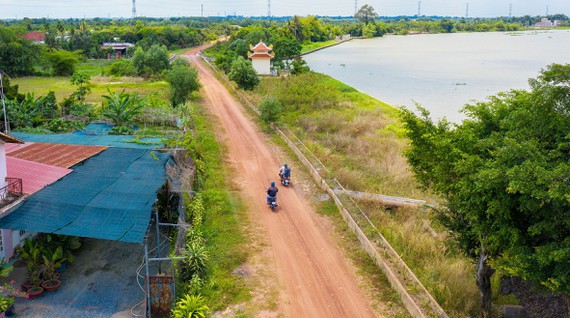 HCM City’s Củ Chi District is located right on the banks of the Sài Gòn River and close to provinces that are well established industrial centres, making it ideal for development as a logistics hub and an eco-tourism destination. Photo sggp.org.vn

“Many urban development criteria including population, area, socio-economic indicators, education levels and urban infrastructure have reached the standards of a city,” she said.

To achieve the goal of becoming a city within the city like Thủ Đức, Củ Chi must improve state management in all fields, including the fight against corruption and wastefulness, experts said at a conference in April.

President Nguyễn Xuân Phúc said at the conference that the city should promote investment in the two suburban districts of Củ Chi and Hóc Môn as part of the plan to develop the city further to the northwest, creating long-term livelihoods for residents and developing new sustainable urban areas.

Saying that the two districts would provide new growth impetus for HCM City, the President stressed the importance of carefully selecting projects to call for investment, ensuring that the potentials and advantages of both suburban districts are optimized.

To achieve this goal, Phúc said both districts should improve state management in all fields, including the fight against corruption and wastefulness.

They must also work to improve the business climate to solicit investment in developing new urban areas, industrial parks, tourist areas and commercial zones, he said.

Hóc Môn and Củ Chi are calling for investment in 55 projects worth a total of VNĐ285 trillion (US$12.46 billion) in infrastructure, industry, high-tech agriculture, trade-service, education-culture-sport and transport.

Nguyễn Anh Tuấn, head of the Department of Planning and Architecture’s general planning management, said Củ Chi should also be developed into a green urban area for tourism by maintaining trade villages.

Ecotourism should be developed at the Củ Chi Tunnels and the Bến Dược Temple, he added.

Though it is just 30km from downtown HCM City, it now takes more than two hours to get there by car because of traffic congestion.

The district would also need to improve its tourism human resources, Tâm said.

While many businesses are looking to speed up their investment in Củ Chi, there are many implementation difficulties that need to be resolved.

Some of the common problems facing most investment projects include compensation and site clearance, overlapping land ownership, bidding for public land and plans that do not match reality.

The President asked the administrations of HCM City and Củ Chi District to coordinate with relevant agencies to solve the above problems and improve the investment and business environment, while speeding up administrative reforms. – VNS