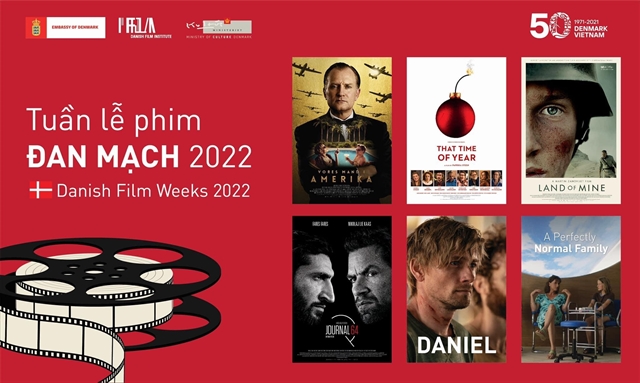 Poster of the event. — Photo courtesy of the Embassy of Denmark in Việt Nam

HÀ NỘI — As part of the festivities that will be held to honour 51 years of bilateral diplomacy between Việt Nam and Denmark, the Danish Film Weeks 2022 are going to be held in Hà Nội, Thừa Thiên-Huế, Đà Nẵng, and HCM City from July 1-14.

The six movies to be screened during the festival are ‘The Good Traitor’, ‘The Purity of Vengeance’, ‘That Time of Year’, ‘A Perfectly Normal Family’, ‘Daniel’, and ‘Land of Mine’.

These films have received a number of nominations and awards at renowned Danish and international film festivals, some of which have age restrictions.

They promise to give Vietnamese audiences a unique perspective on Danish society and life, with engaging and diverse stories.

Notable among these is ‘The Good Traitor’, which tackles the subject of a person’s moral decision, whether to follow the great or opposite forces in order to protect his conscience.

‘Daniel’ describes the painful and perilous circumstances the protagonist’s family must go through in order to rescue their son, who is held captive by ISIS in Syria.

All the movies will be shown in their original language and will feature English and Vietnamese subtitles.

In his remarks, Kim Højlund Christensen, Danish Ambassador to Việt Nam stressed that after 51 years of bilateral diplomatic relations, Việt Nam and Denmark will increase collaboration in all spheres, including culture.

He stated: “I hope that Vietnamese audiences will love these films as much as I do.”

Free tickets are available in Huế and Đà Nẵng from June 22, as well as in Hà Nội and HCM City from June 24. Viewers can visit the official Facebook page of the Embassy of Denmark in Việt Nam for more details on ticketing locations and showtimes.