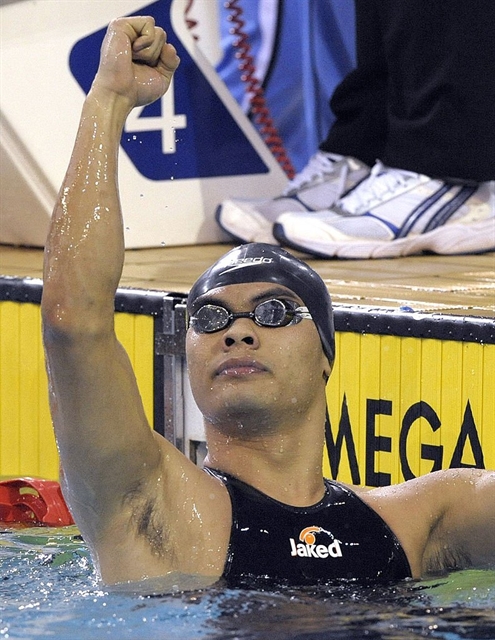 Nguyễn Hữu Việt of Việt Nam celebrates winning the men’s 100m breaststroke swimming final at the 25th Southeast Asian Games in Vientiane in 2009. Việt died on March 25 because after a stroke. AFP/VNA Photo

Việt, who only yesterday supported his country at the 2022 World Cup qualifier between Việt Nam and Oman at the Mỹ Đình Stadium, suffered a cardiac arrest after having a stroke.

“Việt was sent to hospital but he could not make it,” said Trần Thị Hoàng Mai, director of Hải Phòng Culture and Sports Department, confirming the news.

He began swimming at the age of 11 and was called to the national team in 2003. He represented Việt Nam at the Athens Olympics in 2004 and the Beijing Games in 2008.

Việt won the SEA Games 100m breaststroke for Việt Nam in 2005. It was the first swimming gold for Việt Nam, 44 years after the country joined the regional biennial tournament. He was voted the best athlete of 2005.

Việt strongly defended his title in the next two Games, setting a Games record of 1min 1.6secs, before his international retirement in 2011 because of asthma.

Việt’s last event was the National Sports Games in 2014.

Việt is the national record holder in the 50m and 100m breaststrokes, 4x50m medley and 4x100m medley events.

He was nicknamed the ‘breaststroke prince’’ following his exceptional SEA Games performance and moved back to his home town to work as a coach.

“I was shocked hearing the news. His death was a big loss to Việt Nam swimming and sports,” said Đinh Việt Hùng, general secretary of Việt Nam Aquatic Sports Association.

“He was a great athlete who sacrificed a lot for his career and national sport, bringing home the first SEA Games swimming gold and high results internationally.

After retiring from swimming, he was a dedicated coach helping train talented swimmers. It is a great regret that he died while still so young.” VnExpress News