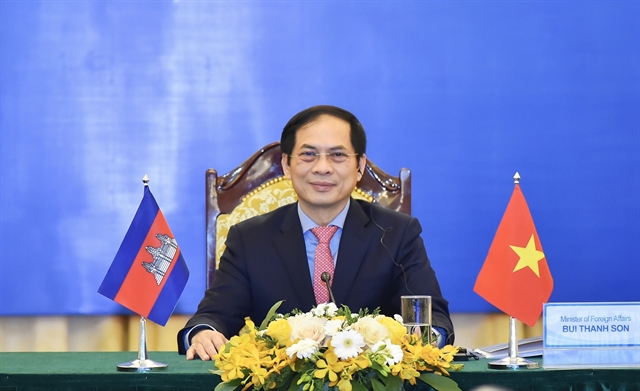 Foreign Minister Bùi Thanh Sơn talks to the press about outstanding achievements in relations between Việt Nam and Cambodia on the 55th anniversary of diplomatic ties (June 24).

Can you talk about the history and meaning of the establishment of the diplomatic relations between Việt Nam and Cambodia, on the occasion of the 55th anniversary of the bilateral ties?

On June 23, 1967, in a message sent to Cambodia’s leader Norodom Sihanouk, President Hồ Chí Minh wrote: “The establishment of diplomatic relations between the two countries is a brilliant demonstration of closed friendship and solidarity. That is a historical event in the relationship between Việt Nam and Cambodia, a positive factor in keeping peace in Indochina and Southeast Asia.”

One day later, on June 24, 1967, Việt Nam and Cambodia officially established diplomatic relations, opening up a new chapter in the common history of the two countries.

After that, Việt Nam and Cambodia stood together, gaining victories in both military and diplomatic battles, and together won the historical victory in the Spring of 1975.

In his visit to Cambodia in March 2005 by Vietnamese Party General Secretary Nông Đức Mạnh, the two sides agreed to develop bilateral relations following the spirit of “good neighbours, traditional friendship, comprehensive cooperation and long-term sustainability”. With that orientation, bilateral ties between the two countries have continuously strengthened and developed, bringing in practical benefits for the people of the two countries and contributing to peace, stability and cooperation in the region and the world.

It can be said that the past 55 years have witnessed an important development period in the Việt Nam-Cambodia relationship, marked by unforgettable historical events when the two countries united to support each other in the struggle for national independence from colonial regimes, and help Cambodia overthrow the Pol Pot genocidal regime, as well as in the building and development cause of each country.

The celebration of the anniversary is an opportunity for the two countries’ people to review the past journey to have a deeper understanding and higher responsibility in preserving and nurturing the time-honoured bilateral friendship and solidarity.

What are the most outstanding achievements gained in the relations between the two countries over the past 55 years, particularly in recent years?

Political ties between the two countries continue to develop well. The two sides have maintained high-level contacts, exchanges and bilateral cooperation mechanisms in all channels, even during the complicated developments of the COVID-19 pandemic in the past two years. The two governments and people have coordinated and supported each other in a timely and effective manner in pandemic prevention and control. Cooperation between ministries, sectors and localities of the two countries was promoted.

Cooperation in the field of security and defence has been strengthened. The two sides have firmly adhered to the principle of not allowing any hostile force to use one’s territory to harm the security and interests of the other.

Based on signed treaties and agreements, the two countries’ agencies, authorities and local people in border areas have made efforts to build a shared border of peace, friendship, cooperation and development. The sides signed two legal documents recognising the completion of 84 per cent of the demarcation and marker planting of their shared border in 2019, and are negotiating to handle the remaining 16 per cent.

The bilateral economic, trade and investment relations have also posted encouraging results. Two-way trade hit US$9.54 billion last year, up 79.1 per cent year-on-year. Việt Nam is running 188 valid investment projects worth $2.8 billion in Cambodia, ranking first in ASEAN and among top five in the world in terms of investment in the country.

In the first three months of 2022, over 46,000 Vietnamese tourists visited Cambodia, making Việt Nam rank first in terms of the number of visitors to the nation.

The two countries’ leaders have also committed to creating favourable conditions for one’s citizens living in the other’s territory, following their laws, and the spirit of friendly neighbourliness.

Other fields of cooperation such as education and training, healthcare, culture and sports continued to be promoted. Each year, Việt Nam grants hundreds of scholarships to Cambodian students to study in Việt Nam. The number of Vietnamese students coming to Cambodia to study has kept rising.

During the process of implementing foreign policies and international integration, the two countries have effectively coordinated at regional and international forums, contributing to peace, stability, cooperation and development of the ASEAN Community as well as in the region and the world.

As head of the diplomatic sector, how do you assess the development prospects of the Việt Nam-Cambodia relations in the future?

Looking back the past 55 years, although undergoing many challenges and ups and downs in the history, the solidarity, traditional friendship and comprehensive cooperation between Việt Nam and Cambodia have been continuously strengthened and developed, becoming a sacred symbol and an invaluable asset of the two countries.

Nowadays, in the context of unexpected changes in the region and the world, the two countries must further strengthen solidarity, cooperation and mutual assistance to deserve the contributions and sacrifices of previous generations and meet the aspirations and interests of their people.

On the foundation of the good political relations and shared determination in maintaining a peaceful and stable environment for development; together with favourable conditions about traditions and experience in cooperation as well as geographical proximity to further boost economic connectivity, people-to-people diplomacy and cooperation between localities, I believe that the relations between the two countries will continue to develop in the future, bringing in practical results following the motto of “good neighbour, traditional friendship, comprehensive cooperation and long-term sustainability”.

This is also the wish and determination of high-ranking leaders of the two countries. — VNS