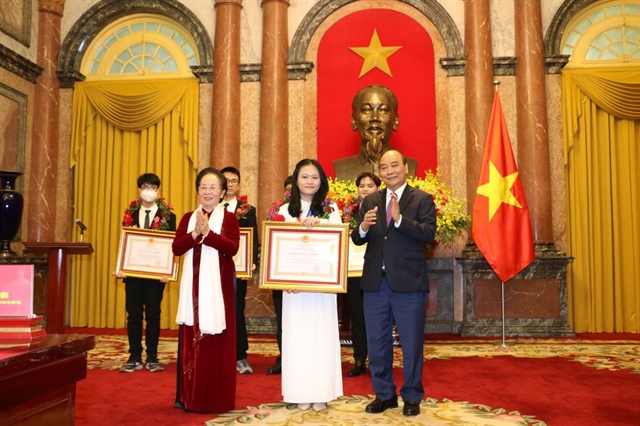 HÀ NỘI — Nguyễn Lê Thảo Anh, a 12th grader at the Hà Nội-Amsterdam High School, was the only female student to win a gold medal at the 2021 International Chemistry Olympiad.

The online competition, which Japan hosted attracting students from 79 countries and territories, was the latest of successes that the girl had once thought out of reach.

“I was speechless and couldn’t describe my feeling of happiness at that moment,” she said, being one of three Vietnamese students to win gold medals.”

This is one of many achievements Thảo Anh gained during her school years. She was recently awarded the Second-class Labour Medal by President Nguyễn Xuân Phúc and honoured as one of 10 outstanding young Vietnamese faces of 2021.

The young student said she had tried many subjects before becoming passionate about chemistry. Her father was a doctorate in mathematics, so she had been inspired to pursue maths and participated in a number of the city’s competitions during her elementary years.

However, when she became a secondary school student at the Hà Nội-Amsterdam High School, Thảo Anh gradually felt that maths was too much for her.

The girl found another inspiration. She realised she could spend many hours doing chemistry homework without ever getting bored. Inspired by her chemistry teacher and encouraged by her family, she decided to challenge herself in this subject, making her first mark with the first prize in the city’s competition for excellent students in 9th grade.

This prize brought her a credit to study at the High School for Gifted Students under the Hà Nội National University of Education.

Thảo Anh continued to try other subjects and was accepted into a series of specialized mathematics, chemistry, and literature classes from Hà Nội-Amsterdam High School for the Gifted in Natural Sciences.

Eventually, she chose to be a student in the chemistry class of Hà Nội-Amsterdam High School. 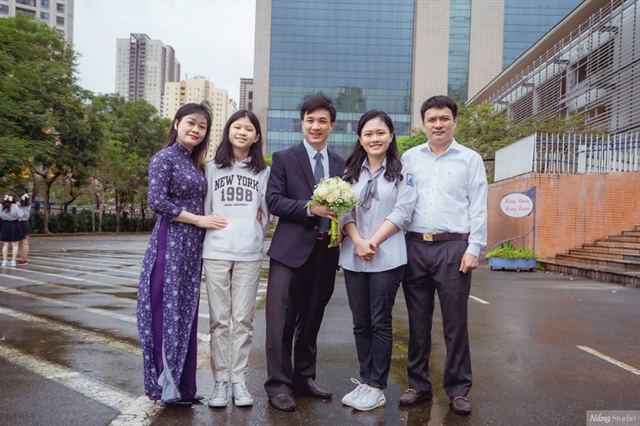 Thảo Anh (second from right) poses with her family and chemistry teacher.

In the early days of high school, Thảo Anh was shocked when exposed to specialised chemistry. The content in high school was much more complicated than what she had experienced, as it involved many experiments and applicability.

It took a few months for her to catch up with the intensity of her studies, and a year to be among the top 32 students in the country in chemistry.

After winning a gold medal at the fifth International Olympiad of Metropolises organised by the Mayor of Moscow, Thảo Anh became a school team member for the International Chemistry Olympiad.

“I was so lucky to have great teachers. With my own effort and a little luck, chemistry has become the highest achievement in all the subjects I have tried. This is also the subject that I feel most appreciated in and attached to,” she said.

She and three other members had been practising chemistry at the dormitory of the Hà Nội National University of Education. She said she studied for no more than eight hours a day and always finished her studies before 10 pm.

The girl sat her biggest exam after two months of intensive study. After the five-hour-long exam, Thảo Anh said she thought that the silver medal would be good enough. But winning the gold medal dispelled all her doubts and anxiety.

Nguyễn Hồng Hải, her chemistry teacher, said Thảo Anh had a good foundation and was good at all subjects.

“She studies all subjects with a sense of high responsibility and aspiration. She has learned a lot of new knowledge in the last two years, helping her feel more confident in the subject,” he said.

Thảo Anh is now thinking about her plans for the future. After being inspired by the lectures of Dr Frances Arnold, the first American woman to win the Nobel Prize in chemistry in 2018, Thảo Anh decided to pursue chemistry further and gained a full scholarship to study Science in Pharmacology at the University of Melbourne in Australia.

She hopes this will be a chance to improve her abilities and help contribute to the community. — VnExpress News