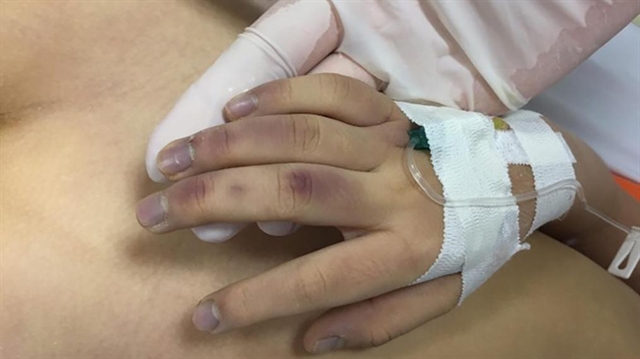 The injuries of the victim. — Photo provided by the hospital

According to an investigation, around noon on September 16, Công was tutoring his daughter at home and felt frustrated for her inadequate attention to the lesson, and beat the girl with a wooden chopstick on her hands and legs. He then continued with a 50cm bamboo stick to beat the girl.

While his wife was talking about their child’s recent behaviour – she tended to watch television instead of studying – Công lost his temper and used a wooden broomstick to beat her.

At 3pm on the same day, the child woke up to eat and had a stomach ache and fever, alongside a bout of vomiting. The child was rushed to Việt Nam National Children’s Hospital, but the doctors concluded she had died before she got to the hospital.

The hospital found the bruises and injuries on her body suspicious and had reported to the authorities.

The police said that the injuries were caused by the impact of an object, and the child suffocated while regurgitating food.

Công confessed his actions to the police.

The father will be prosecuted for “intentionally causing injury” to a child.

The incident came just a few weeks after the national outrage over the death of a eight-year-old girl in HCM City following repeated violent abuse by the fiance of her father. — VnExpress News

Previous Australia records highest temperature in 62 years
Next Covid situation no longer to be decided by daily caseload: health ministry