Domestic waste fee to be charged based on volume 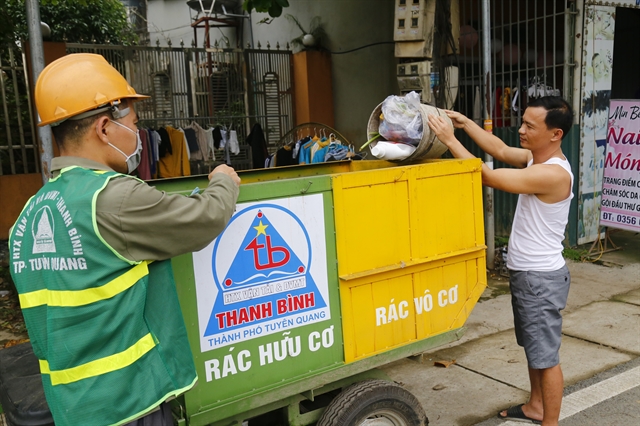 Local people in the northern province of Tuyên Quang have been instructed to classify domestic waste at source. — VNA/VnExpress News Photo Nam Sương

HÀ NỘI — Solid waste classification at source and volume-based waste fee collection must be implemented by 2024, according to the roadmap of the new Environment Law which took effect on January 1, 2022.

This is an amended point of the new law, requiring households and individuals to sort their domestic waste into three groups: recyclable waste, food waste and other types of domestic waste.

According to Hiền, waste classification at source in Việt Nam has been only applied at a small scale in some localities and not made compulsory. Expenses for collecting, transporting and treating solid domestic waste are currently paid by the State budget.

Each household pays the same waste collection fee depending on the number of family members, Hiền said. “This has not encouraged people to reduce, reuse and recycle waste as well as classify waste at source.”

“Collecting waste fees based on volume discharged means the more you release, the more you have to pay. That will encourage people and groups to recycle and reduce the amount of waste they throw away,” he said.

The Ministry of Natural Resources and Environment will compile technical instructions on solid waste classification at source and will issue it to help localities apply the new regulations, he said.

The amended Environment Law also stipulates that solid domestic waste which has been recycled is not subject to waste collection, transportation and treatment fees.

Food waste and waste classified as other types must be put in packages and transferred to treatment establishments.

Food waste can be used as organic fertiliser or animal feed.

Provincial people’s committees have the right to determine the fee level. The unit that collects and transports solid waste each day has the right to refuse to collect and transport the waste of households and individuals that has not been classified, according to the new law.

Detailed plans for waste classification at source and volume-based waste collection must be completed by local authorities no later than December 31, 2024.

The Vietnamese Ministry of Natural Resources and Environment has learned from the models and experiences of other countries while studying amendments to laws, he said. — VnExpress News