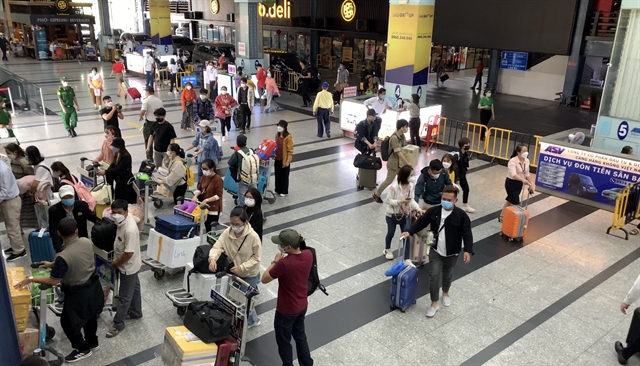 Construction of the new third passenger terminal was expected to start late last year, but it is still waiting for 16ha of land managed by the Ministry of National Defence that is yet to be handed over.

The delay is happening despite the fact that the terminal has been proposed as a key and urgent traffic project for the city.

It has a total investment capital of nearly VNĐ11 trillion (US$480 million) and is expected to be completed within 37 months.

Experts have said that the new passenger terminal must be built as soon as possible to increase the service capability of the Tân Sơn Nhất International Airport.

It is designed to serve about 20 million passengers a year and help reduce the current overload on the airport.

By 2025, the airport will continue to play a very important role in the city’s economic recovery and the country’s development, handing about 50 million passengers a year even after the new Long Thành Airport in Đồng Nai Province begins operations.

However, the main investor of the project, State-owned Airports Corporation of Việt Nam (ACV), has said construction might lag behind schedule.

While the defense ministry has completed a plan to hand over the 16ha area in Tân Bình District and is waiting for a decision from the municipal People’s Committee, the ACV is yet to hear in writing from the latter.

After the decision is made, new procedures will take a lot of time, at least another next six months, ACV has said.

Several experts have stressed that construction of the project needs to begin on time to avoid financial losses.

If the project is delayed by even one year, thousands of billions of Vietnamese đồng would be lost, they’ve warned.

When the pandemic is brought under control, demand for outbound travel will be high, increasing pressure on the overloaded airport.

Some experts have been suggested that authorised agencies hand over the land to start construction first, and procedures be completed later.

An ACV representative told the Tuổi trẻ (Youth) newspaper that they expect to receive land for starting construction in April and complete work by the second quarter of 2024.

Lương Minh Phúc, director of the city’s Management Board for Traffic Works Construction and Investment, said that his office, in collaboration with the city’s Department of Transport and authorities in Tân Bình District, are preparing to begin construction of several traffic infrastructure works to ease congestion in areas around the airport and link with the new terminal.

Construction of a new road connecting Trần Quốc Hoàn and Cộng Hòa streets in Tân Bình District is expected to start by the end of the second quarter and be completed within 18 months, he said.

Other works include the building of two underpasses at Phan Thúc Duyện – Trần Quốc Hoàn and Trường Chinh – Tân Kỳ Tân Quý intersections and an overpass in front of the new terminal.

The streets of Hoàng Hoa Thám and Tân Kỳ Tân Quý and a section of Cộng Hòa Street will be expanded at the cost of hundreds of billions of đồng, he added. — VnExpress News