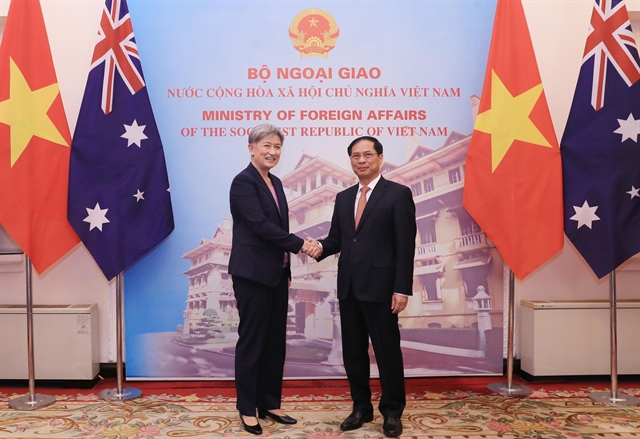 Việt Nam is the first Southeast Asian country Wong paid a visit to after assuming the Australian Minister of Foreign Affairs position.

Congratulating Australia on its success in the federal election and COVID-19 vaccination campaign, Minister Sơn believes that Wong’s visit will further promote the strategic partnership between the two countries.

Việt Nam and Australia will soon commemorate the 50th anniversary of the establishment of their diplomatic relations in 2023.

The Vietnamese foreign minister also expressed his gratitude to the Australian government for their prompt support in providing COVID-19 vaccines and medical equipment for Việt Nam, particularly the 14.4 million doses for children, which has helped the country accelerate its vaccination drive for socio-economic recovery.

Minister Wong reaffirmed that Australia attached great importance to Việt Nam’s role in the region and that the new Australian government would continue to strengthen the strategic partnership with Việt Nam.

The two foreign ministers agreed that as both countries have fully reopened, it is necessary to promote cooperation, especially in industries most hit by the pandemic, such as tourism, education and labour collaboration.

The ministers also share the same perspective on enhancing partnerships in new and potential areas, such as green and sustainable development, to address non-traditional security issues.

Welcoming Australia’s comprehensive strategic partnership with ASEAN, Minister Sơn suggested that the Oceanian country continue to make positive contributions to cooperation in the region based on respect for the central role of ASEAN and peace, stability and prosperity.

Minister Penny Wong affirmed that Australia highly regarded cooperation with ASEAN and would continue to enhance this partnership for the sustainable development of the Mekong sub-region.

She also emphasised the importance of maintaining peace, stability, safety and freedom of marine and aviation navigation in the South China Sea (called East Sea in Việt Nam) with respect to international laws, including the 1982 United Nations Convention on the Law of the Sea (UNCLOS).

The Việt Nam Australia Centre website was also launched on the same day.

At the event, Dr Thắng emphasised that the centre was a highlight in the strategic partnership between Việt Nam and Australia. This was also one of the activities leading to the 50th anniversary of the diplomatic relation between the two countries.

“The centre will play a crucial role in allowing Việt Nam access to Australia’s knowledge, skills, and experience in education and training for scientific research, while also improving the understanding and positive partnership between the two countries,” said Dr Thắng.

It will contribute to enhancing the knowledge of Việt Nam’s future generation of leaders, promoting collaboration and strengthening connections between the Australian and Vietnamese people.

Minister Wong also hopes that through the centre, Việt Nam can increase the participation of women in leadership.

She added that the cooperative partnership between the two countries was built on the foundation of trust – an increasingly important factor today when the region is being economically and strategically reshaped.

Việt Nam and Australia want to ensure peace and prosperity, based on the respect for each nation’s sovereignty. Every dispute in the region must be addressed peacefully in accordance with international laws.

Wong said: “We want to understand Việt Nam’s perspectives on the opportunities and challenges we face and how we can meet them together.

“We understand the importance of concrete actions, not just words, to sustain and grow our shared prosperity, particularly at this challenging time.” — VNS