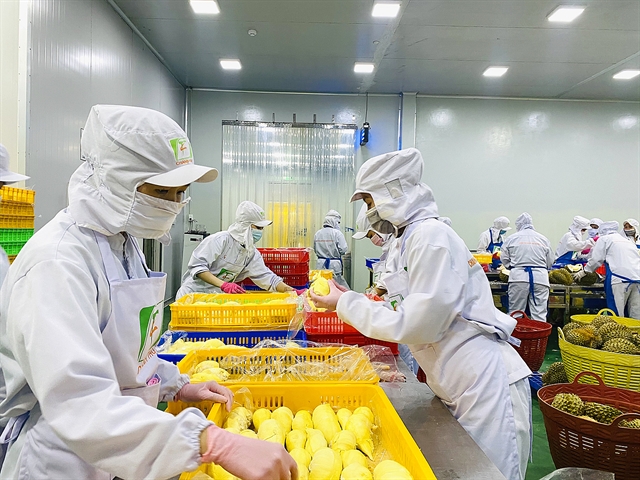 Workers processing durians at a CTL factory. Cold storage allows the fruits to be preserved when they are at a low price and be sold later. Photo sggp.org.vn

HÀ NỘI — In contrast to the slump before Tết, Vietnamese agricultural produce is soaring in price, bringing huge profits to any firm that has been keeping its fruits in cold storage. Meanwhile, firms without cold storages have to sell their fruits at low prices or even throw them away.

Bình Thuận produces around 700,000 tonnes of dragon fruits per year. However, there are just 310 cold stores in the province with a total capacity of 16,000 tonnes. That means more than 97 per cent of its dragon fruits cannot be preserved during trade uncertainty.

“If the province builds more cold storages within production areas, it will help local farmers a lot. With cold stores, we could draw up production plans quarterly or monthly to meet export demand,” said the deputy director of Bình Thuận’s Department of Agriculture and Rural Development.

HAGL’s bananas are processed and packaged in factories, and then kept in cold storage. Thanks to these ideal conditions, the bananas can be preserved for around 1.5 months at a temperature of 14 degrees Celsius, allowing them to be shipped worldwide without any deterioration in quality.

Chánh Thu Export and Import Fruit Ltd. (CTL) followed suit by building a 10ha processing and preserving factory in Đắk Lắk Province, which is capable of handling up to 20,000 tonnes of durian.

According to CTL’s deputy chairman, the durian harvest is normally just six months long. Cold storage allows part of the harvested durians to be kept in reserve and processed later. This means the company can export durians even out-of-season.

Many firms know cold storage holds the key to sustainable agricultural exports, but few are financially able to follow the example of HAGL and CTL.

Võ Huy Hoàng, chairman of Bình Thuận’ Dragon Fruit Association, noted that modern German-technology stores can keep dragon fruits fresh for about two months, but it takes up to VNĐ500 billion (US$22 million) to build such a store.

According to economic experts, cold storage would stabilise the agricultural market and make farmers less vulnerable to export volatility.