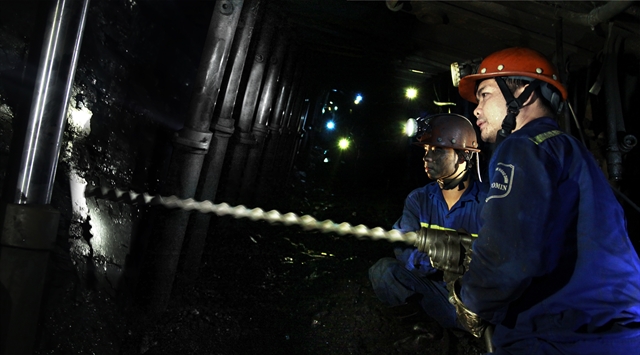 HÀ NỘI — Vietnam Electricity (EVN) has said that the amount of coal supplied to its thermal power plants (TPP) fell short of the contractual amounts, putting them at risk.

The total amount of coal delivered to the TPPs in Q1/2022 was about 4.49 million tonnes, less than 5.85 million tonnes as stated in the contracts.

Insufficient coal supply, coupled with low coal in reserve, has forced many TPPs to operate under capacity or shut down temporarily in late March.

Notably, Nghi Sơn 1, Vũng Áng 1 and Vĩnh Tân 2 TPPs had to operate at 60 per cent capacity. Hải Phòng TPP barely had enough coal to run one of its four generators.

The national grid was short of 3 GW of electricity accordingly.

“Coal supply may not improve in the short-term, posing a risk of electricity shortage in April,” said a representative of EVN.

The Ministry of Industry and Trade was concerned that the Vietnam Coal and Mineral Industries Group (TKV) and Đông Bắc Corp., two coal suppliers, might have to compensate TPP investors for the temporary shutdown of their generators.

Accordingly, the ministry issued Document No 1225, urging the two suppliers to quickly look at ways to deliver coal at the contractual amounts, eliminating the risk of compensation.

“Under no circumstances should there be a coal shortage for electricity production,” the ministry said.

TKV attributed the coal shortages to the pandemic, which rendered its coal mines understaffed, and the Russia-Ukraine conflict, which disrupted coal supply in the international market.

EVN called for energy-saving actions, including turning off unnecessary lights and unplugging unused electronics to ease the strain of the electricity shortages.

On April 1, Minister of Industry and Trade Nguyễn Hồng Diên held a meeting to discuss ways to deal with the risk of electricity shortages.

At the meeting, the minister urged TKV, Đông Bắc Corp. and Vietnam Oil and Gas Group to increase output and buy more coal and gas from their partners to meet domestic demand.

He also called on agencies in charge of the national grid and other transmission systems to stay well-prepared at all times to ensure undisrupted electricity supply.

Regarding fuel and electricity contracts, he requested parties quickly resolve the problems holding back the contracts.

In the long-term, the groups are urged to cooperate with relevant authorities on resolving backlog of issues related to contractual prices and payments.

On the same day, the minister met with the Australian Ambassador to Việt Nam Robyn Mudie, asking her to help connect Australian coal suppliers with the Vietnamese groups to supply around 5 million tonnes of coal each year.