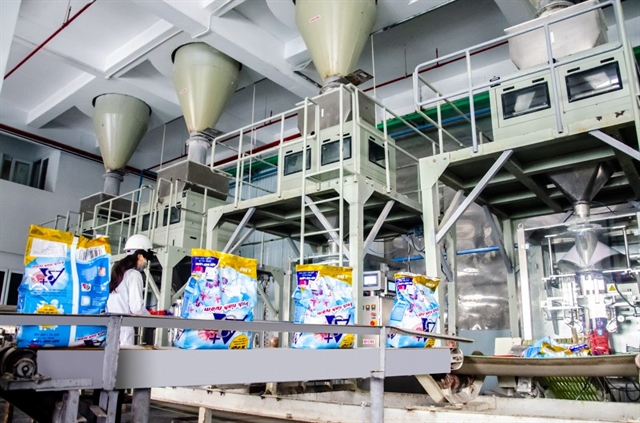 HÀ NỘI — Thanks to their good growth potential and attractive valuation, chemical stocks are being included in the portfolios of investors.

The stock market last week recorded four out of five declining sessions, of which the first session of the week recorded the strongest decline with the VN-Index losing more than 57 points. Some investors see this as an opportunity to hunt for cheap stocks.

Phạm Đình Công from Hà Nội told tinnhanhchungkhoan.vn that he had taken the opportunity to buy some stocks in the past week, prioritising the enterprises with good financial status and growth potential, such as the chemical group.

According to ACB Securities Company (ACBS), in May 2022, the industrial production index of the chemical group continued to grow by 5 per cent. Rising selling prices from the beginning of the year until now are the main growth driver of this group.

In the first quarter of this year, a series of chemical enterprises reported sudden increases in profits. Đức Giang Chemical Group Joint Stock Company (DGC) reported a profit of VNĐ1.51 trillion (US$67.7 billion), the highest since its inception, up 418 per cent over the same period last year. South Basic Chemicals JSC (CSV) reported a 3-time higher profit than the same period last year thanks to a sharp increase in output and selling prices, completing 56 per cent of the yearly plan. Việt Trì Chemical JSC (HVT) achieved a profit of VNĐ36 billion ($1.55 million), four times higher than last year.

Experts forecast that this growth momentum will continue in the future. Mirae Asset Vietnam Securities Company said that the gradual reduction of heavy industrial products by China, as well as partial closure of the country under the influence of the COVID-19 pandemic, has reduced the long-term supply of many chemical products. World prices of phosphorus continued to rise, the company said.

In fact, the price of phosphorus has increased by nearly 40 per cent in the first two months of this year and has not stopped. The price of nitric acid, a chemical used in fertiliser production, increased continuously since March, up by 26 per cent.

Analysts forecast that the business results of the second quarter of chemical businesses will continue to flourish.

In the draft of the Việt Nam Chemical Industry Development Strategy to 2030 that the Ministry of Industry and Trade is submitting to the Government, the chemical industry is developed in both width and depth.

Not only meeting domestic demand, businesses in the industry will boost exports, forming a value chain to deeply participate in the industrial production network of the region, aiming for green economic growth.

Currently, the market price of chemical stocks is seeing corrections which are considered to be cheap compared to the intrinsic potential of the businesses. In the long term, this is an industry group with stable and sustainable growth, bringing benefits to investors, said Nguyễn Thế Minh, research director of Yuanta Securities Vietnam.

He said that chemical stocks are one of the groups benefiting from the recovery of the economy.  VNS