Yoga for humanity: an invaluable gift from ancient India to the modern world

Yoga is a unique contribution of ancient Indian civilisation to the modern world. The word ‘Yoga’ literally means ‘to unite’. Yoga embodies unity of mind and body; thought and action; restraint and fulfilment; and harmony between humankind and nature. It is a holistic approach to health and well-being.

With the conviction that Yoga could unite humankind worldwide, Prime Minister of India, Shri Narendra Modi, proposed declaring an International Day of Yoga during his address at the United Nations General Assembly on September 27 2014.

Soon afterwards, on December 11, 2014, the United Nations General Assembly, by consensus, declared June 21 to be celebrated as the International Day of Yoga every year. The declaration showcased the immense popularity of Yoga worldwide and the universal acknowledgement of its benefits. 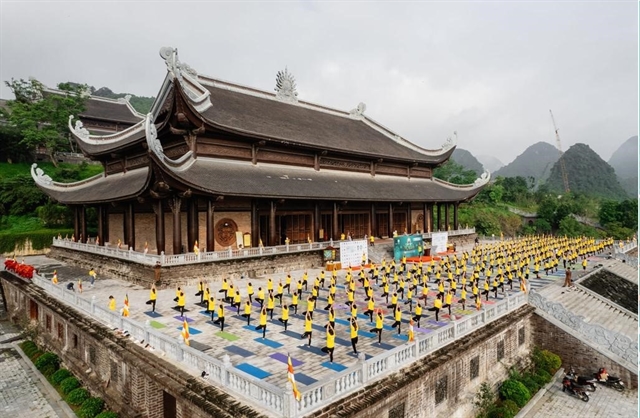 The celebration of the 8th IDY in Tam Chúc Pagoda, Hà Nam Province, on May 29, 2022. Courtesy Photo of the embassy

Since then, the Embassy of India has been organising International Day of Yoga celebrations in Việt Nam in close cooperation with local governments and various socio-cultural organisations.

The International Day of Yoga celebrations this year have an added significance. This year, India is celebrating the 75th anniversary of its independence, known as “Azadi Ka Amrit Mahotsav”. At the same time, India and Việt Nam are marking the 50th anniversary of diplomatic relations.

The International Day of Yoga theme this year is “Yoga for Humanity”. In the present time, when people all around the world are adapting their lives to the new reality of a pandemic, Yoga has become even more relevant by helping millions across the globe maintain a healthy regimen and boosting immunity and a sense of balance during these extraordinary times.

In a letter to Prime Minister of Việt Nam Phạm Minh Chính on the occasion of International Day of Yoga this year, Prime Minister Modi has noted that in a world beset by various challenges, over a billion people see Yoga as an enhancer of their physical, mental, spiritual and intellectual well-being. He has also expressed confidence that Yoga will contribute to creating a healthier and peaceful planet.

For this year’s celebrations, Việt Nam is one of the countries we are partnering with in a Global Yoga Ring programme in which India’s national television broadcaster, Doordarshan, will be carrying out live telecasts of events based on different time zones from all over the world. For this, we are working with Quảng Ninh Province to organise a signature event at the iconic Hạ Long Bay on June 21.

The immense popularity of Yoga provides a strong cultural and people-to-people connection between Việt Nam and India. By celebrating the International Day of Yoga on June 21, we will celebrate our common humanity and contribute to global well-being. VNS