The star re-posted the photo published on Atmos, an American magazine about climate and culture.

The caption for the original post on Atmos’s Instagram stated: “While the floods in central Vietnam often result in destruction, in the Mekong Delta they’re viewed as a gift from heaven.”

“These water lilies are wild plants and provide a supplementary income for the female farmers, who harvest and sell them at the markets. The flowers can be used for tea or decoration and the edible stalks can be eaten raw or dunked into soup.”

On Facebook, many Vietnamese fans were delighted to see the singer’s post with some leaving comments asking her to hold a concert in Vietnam one day.

Award-winning photographer Pham Huy Trung, the author of the photo, was glad that his shot impressed an international star like Cabello.

Trung’s “Washing harvested water lilies” was taken in 2019, capturing five women in conical hats washing pink water lilies in a flooded field in Long An Province, southern Vietnam. The bunches of pink flowers with long stalks together form an S shape as the women clean the flowers after harvesting them. The photo has won multiple international accolades, including being shortlisted for the final round of the 2020 Sony World Photography Awards.

Camila Cabello is a Cuban-American singer. She shot into fame after auditioning for The X Factor in 2012 became a member of the female group Fifth Harmony. After announcing her departure from the group in late 2016, she became an international superstar after the success of the hit song Havana. 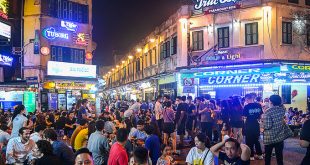