A nurse whose “cheerful dancing” in protective gear has won millions of admirers after it was caught by an elevator camera is surprised by its wild popularity.

During about 20 seconds that she was in an elevator, Minh Trang, a nurse taking care of Covid infected newborns, goes into into apparent dance mode after completing a six-hour shift on the morning of February 3, still wearing her protective gear.

“I don’t think simple stretching movements can be called dancing. And it is even more surprising that my moves have conveyed positive energy to the community and that the video has gone viral on social networks,” Trang told VnExpress. 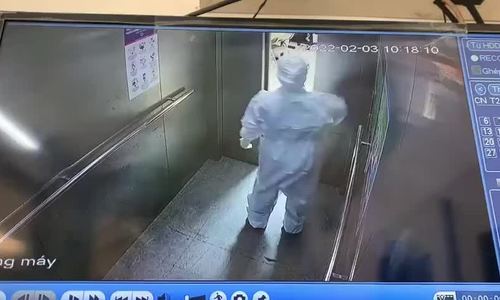 The video attracted several million likes, comments and shares on some forums. Many people expressed their admiration for the optimistic energy of a frontline medical worker on the first days of the Lunar New Year.

“So adorable! A good mental relaxation exercise by our white-shirted heroes that is rarely seen”, commented Tran Tri, one social media user.

Trang works for the Hanoi Obstetrics and Gynecology Hospital. She was in charge of taking care of newborns who have infected with Covid or have had close contact with Covid patients during the Tet holiday from Jan 29 – Feb 6.

Trang and her coworkers are under a lot of stress because of the small number of frontline nurses available. The wards for the newborns who have infected with Covid or have had close contact with Covid patients are overcrowded frequently. There are times when the facility accepts more than 50 children in a day.

Trang worked nonstop for several days in a row, putting in 6-8 hours per day. “When I get into my room and sit down in the chair, my hands and feet are exhausted, my lungs are out of breath, and I have big marks on my face from wearing protective gear all day.”

So, instead of sitting glumly, Trang and her colleagues use their free time to engage in “tension releasing” movements that also give their emotions a positive direction, she said.

It was the first time 27-year-old Trang was away from her family during Tet, the Lunar New Year holiday from Jan. 29-Feb. 6. She said this year’s holiday was an unforgettable one, with she and her colleagues spending days and nights caring for pregnant women and F0 babies instead of spending time with their families.

“There was sadness and self-pity, but I had to put my own feelings aside swiftly and focus on my duty because many patients were waiting for treatment.”

Trang said there were peach blossoms, kumquats, and delicious traditional Tet dishes for medical staff. They were able to gather and wish each other a Happy New Year in a New Year’s Eve celebration at the neonatal intensive care unit. The hospital’s leaders also encouraged the online public to send their best wishes to the crew.

The young nurse’s parents said they supported Trang’s volunteer work in the anti-epidemic zone, even if it meant working during the Tet holiday.

“I always contact my daughter when she is off duty to encourage and motivate her to work hard, and to tell her to try and stay healthy. Our family will celebrate the New Year when she returns,” Trang’s father, a retired doctor, said.

After finishing her duty on February 6, the last day of the Tet holiday, Trang returned home and self-monitored her health for seven days before joining a belated Tet celebration with her parents and relatives in Hanoi’s Dong Anh district.

“The greatest delight in the New Year for my colleagues and me is to see our young patients recover from the disease and reunite with their moms and families,” she said, smiling.

All babies born in the treatment area are in good health, doctors said. Many babies were discharged from the hospital after testing negative for the second time. On February 4, there were just 20 infants being cared for at the hospital.

Number of Chinese visitors to Vietnam forecast to reach 4.5 million this year: HSBC