Cà Ná seaport complex Phase 1 to be finished in Q1 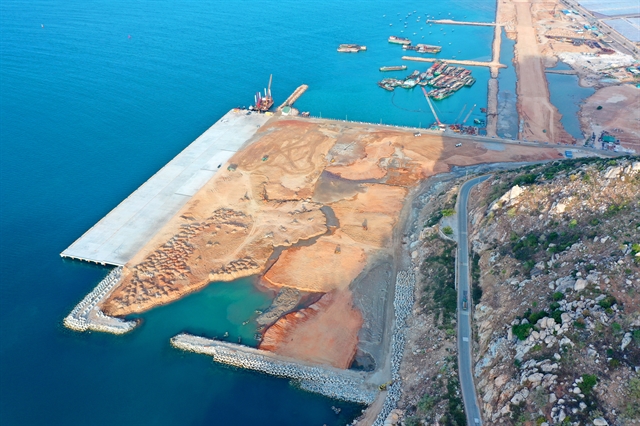 Cà Ná seaport complex is designed with a capacity to receive ships of up to 300,000 DWT. — Photo courtesy of the group

HÀ NỘI — Cà Ná seaport complex Phase 1 with a capacity of 100,000 DWT will be operational in the first quarter in central Ninh Thuận Province, announced its investor Trungnam Group.

Nguyễn Tâm Thịnh, the group’s chairman said although there were lots of difficulties and hurdles during the construction of Phase 1 due to the complicated evolution of the pandemic, the firm has overcome them and got construction done.

Thịnh said the first phase, which has a total planning area of 85.52 hectares with two ports, will focus on construction material sources and local products of Ninh Thuận with a total estimated output of 1.332 million tonnes per year.

He added the Cà Ná Complex, with three phases and 17 piers will be a deep-water port with very favourable terrain. It is aimed to be a transhipment point for the entire South Central Coast region and Central Highlands, relieving pressure on seaports in the Southeast region and HCM City.

The investor said it was rushing to complete the last legal procedures to bring phase 1 into operation in the early second quarter. Considering the completion of Phase 1 as an essential basis for the future creation of a logistics – industry – mineral – energy urban region on a scale of up to billions of USD, Trungnam Group asked the provincial officials to support it on various issues and problems that may arise during the implementation process.

According to the investor, the most significant challenge the project faces now was a lack of supplies for levelling and construction materials in the area.

In detail, it asked the local authorities to speed up the legal procedures for exploring the Giang mining quarry and allow the conversion of land use purposes to include Chao hill in the construction material mine plan to help ease the shortage of materials for construction.

Trungnam Group also requested that the province accept its participation in Cà Ná Seaport’s bidding phase 2 to create a port capable of receiving ships of up to 300,000 DWT.

He added it was one of the essential elements in its development strategy and a short and long-term breakthrough for the province.

Regarding the issues mentioned, Thanh said Ninh Thuận would complete all the procedures as soon as possible, asking the group to work closely with the province’s departments so all barriers could be removed.

As the port is a crucial project for Ninh Thuận Province, Thanh said the province will support the investor on construction. — VnExpress News