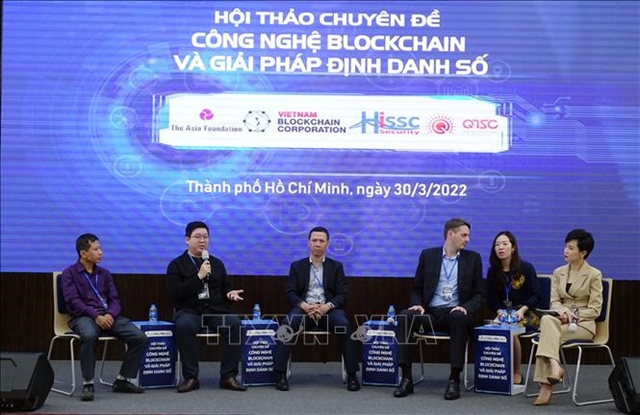 The usage of blockchain for digital identifiers can facilitate the development of e-Government, according to a conference in HCM City. — VNA/VnExpress News Photo

Việt Nam has been focusing on researching and applying blockchain, a form of data storage and transmission technology using encryption.

Due to its transparency in data sharing, high confidentiality and trustworthiness, blockchain is being used in many industries such as finance, logistics and retail.

Đỗ Văn Long, board chairman and general director of Việt Nam Blockchain JSC, said that in recent years the Government has been focusing on promoting the usage of 4.0 technologies for digital identification.

“Blockchain is crucial for digital transformation in many industries in Việt Nam, especially for information verification.”

“Digital identifiers provide information to verify a person in an online environment and simplify the interaction between people, businesses and the Government. This can be beneficial for online public services and the development of e-Government.”

Filip Graovac, Việt Nam Deputy Country Representative from The Asia Foundation, said that a personal identifier was crucial for societies and economies.

“People are becoming more and more mobile, and companies are growing dependent on freelance workers. Decentralised digital identifiers can provide access to proof of identity, capabilities, proficiency and other attestations while getting over problems such as loss of data or fake identification,” he said.

“Digital identifiers will bring great changes, so we should be careful not to let them be misused for violations of personal identification regulations.”

According to other experts at the conference, infrastructure security is crucial for this system. Users must be allowed to have control of their digital identifiers and know when who and why they are being shared.