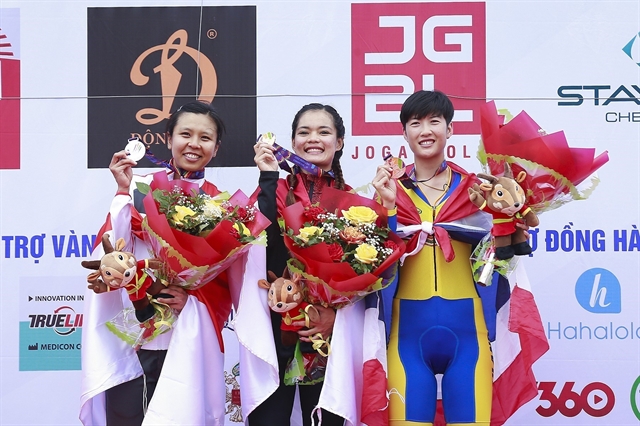 The winners of the women’s road individual time trial category at the SEA Games 31 on May 20. — VNA/VNS Photo Trọng Đạt

HÀ NỘI — Cyclist Piriatna Delia Ayustina triumphed in the women’s road individual time trial category at the Games on May 20.

Ayustina of Indonesia took the lead after clocking a time of 40:08.44 and an average speed of 44.13km per hour. In March, the Indonesian cyclist claimed silver at the 2022 Asian Road Cycling Championships in Dushanbe in Tajikistan.

The women’s event attracted 11 cyclists in seven countries, competing in the 30km distance.

The weather was cool, so it was convenient for the athletes to perform. The average speed of the cyclists was 40km per hour.

With a strong sprint, the Thai cyclist Chawchiang Kwang Peerapol took the gold with a time of 48:32.404 and an average speed of 48.90km per hour.

There are eight countries participating in cycling in the Games, with 260 athletes and coaches. There are seven international referees, 58 members of the organising board, and other national referees to manage the cycling.

Athletes are competing in the road cycling on May 19-22. — VNS