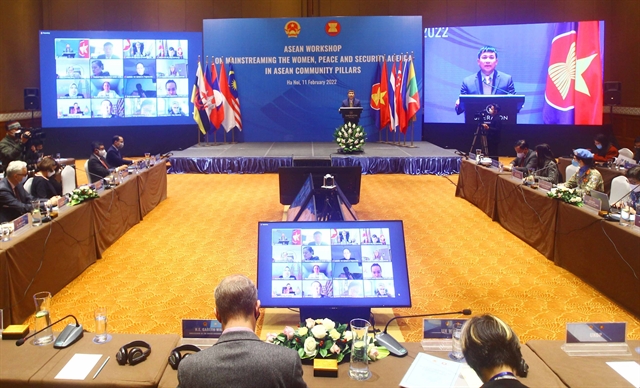 The workshop was held by the Ministry of Foreign Affairs in Hà Nội on Friday. —VNA/VnExpress News Photo

HÀ NỘI —  Experts have highlighted the need to promote women, peace and security (WPS) at an ASEAN workshop held by the Ministry of Foreign Affairs in Hà Nội on Friday.

Despite being adopted by the United Nations Security Council in 2000, Resolution 1325 on WPS has yet to be fully implemented within ASEAN, according to Deputy Minister of Foreign Affairs Nguyễn Minh Vũ.

Through the workshop, ASEAN is looking for the next step in promoting WPS through all ASEAN-agencies and institutions, in the form of three pillars; and gradually forming concepts of WPS and incorporating them into the ASEAN Community Vision after 2025, as well as towards the construction of a Regional Action Plan on WPS, with concrete targets and activities, he said.

Vũ suggested ASEAN incorporate gender and its related fields into ASEAN community pillars, analysing peace, traditional and non-traditional security policies of the region, in order to give early warnings to prevent disasters, terrorism and conflicts.

Addressing the opening ceremony, Vicky Ford, Minister for Africa, Latin America and the Caribbean at the Foreign, Commonwealth and Development Office of the UK, said gender equality was the only way to build an equal and prosperous society.

The UK is committed to supporting Việt Nam in building a draft national action plan on WPS, and will cooperate with the ASEAN Institute for Peace and Reconciliation to organise training, she said.

The UK applauded the commitments and achievements of ASEAN in building a regional action plan on WPS, she added.

The workshop had two sessions with the participation of leading experts of the UN, ASEAN and countries, to strengthen WPS goals.

At the first session on ASEAN and the international community’s efforts in promoting a WPS agenda, participants highlighted the need to review efforts, contributions and achievements that promote WPS, in implementing the UN Resolution 1325 and the joint declaration about promoting WPS within ASEAN.

Through presentations and discussions with experts, ASEAN and its partners look into the methods to effectively implement the UN Resolution 1325, and the steps required to build national and regional action plans on WPS.

Furthermore, practical measures to help ASEAN mainstream WPS agenda in community pillars and institutions have been put forward, towards a future when the role of women increase in conformity with their power and capacity.

Since the early 21st century, the UN has continuously promoted global awareness of the important role of women in preventing and handling conflicts and building peace. This effort was marked with the adoption of the UN Resolution 1325 on WPS in 2000.

As a country that has always attached great importance to the role of women in building and strengthening peace and security, Việt Nam has made many practical contributions to promote the implementation of a WPS agenda within ASEAN, particularly during its ASEAN chairmanship in 2020. — VnExpress News