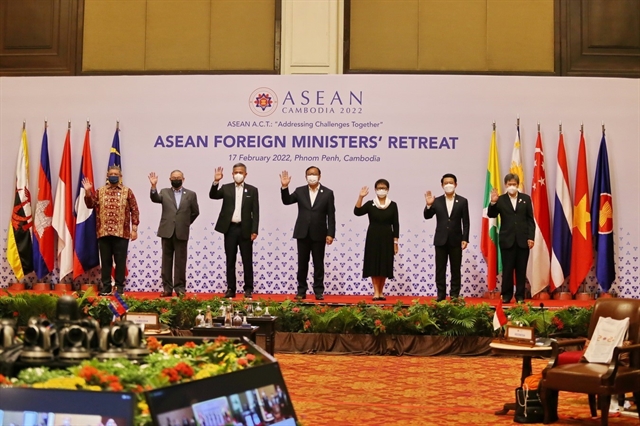 The ASEAN Foreign Ministers’ Meeting Retreat (AMMR) was held both online and in-person in Cambodia on February 16-17. — VNA/VnExpress News Photo

This was the first face-to-face ASEAN foreign ministers’ meeting held by Cambodia as ASEAN chairman for 2022 and after a hiatus of more than a year caused by the COVID-19 pandemic.

The meeting was attended by foreign ministers of the member states and the ASEAN General Secretary. The Vietnamese delegation was led by Foreign Minister Bùi Thanh Sơn.

Minister Sơn voiced his support for the priorities and initiatives proposed by Cambodia in three key pillars of ASEAN, including the Political-Security Community, the Economic Community, and the Socio-Cultural Community; and committed to closely coordinating with Cambodia to realise these initiatives.

They agreed to speed up the implementation of remaining action streams within the ASEAN Community Vision towards 2025 and asked to soon put into operation the High-Level Task Force on building the ASEAN Vision after 2025.

They stressed the need for ASEAN to raise regional resilience capacity in the face of emerging traditional and non-traditional challenges, including continuing to respond to COVID-19 and promoting regional recovery after the pandemic. ASEAN has so far received around US$30 million for the COVID-19 Response Fund, which has been partly used to purchase vaccines for member countries; and continued to mobilise contributions for the Regional Reserve of Medical Supplies.

In order to fulfil the target of regional growth of 5.1 per cent in 2022, they suggested ASEAN boost the implementation plan of the ASEAN Comprehensive Recovery Framework (ACRF) and the ASEAN Travel Corridor Arrangement Framework (ATCAF); as well as to comprehensively promote fields of cooperation such as digital economy, e-commerce, digital connection, science and technology, start-ups for women and youths, development gap narrowing, sustainable development, human resources development, and people-to-people exchanges.

They agreed to maintain ASEAN solidarity and unity, expand and deepen the bloc’s foreign relations and improve the efficiency of mechanisms led by ASEAN, effectively contributing to promoting peace, stability, sustainable development, and prosperity in the region.

They also spent time discussing regional and international issues of common concern, including the East Sea and Myanmar.

Speaking at the meeting, Minister Sơn called for solidarity, unity, dialogue, and cooperation to be enhanced to serve as the basis for a strong and resilient ASEAN Community.

He asked ASEAN to press on with implementing COVID-19 response initiatives such as the ACRF and the ATCAF. He also proposed mutual recognition of “vaccine passports” in the region so as to resume travel soon and facilitate comprehensive recovery, adding that attention should be paid to capacity building and technology transfer in order to stay ready to cope with new emergencies similar to the pandemic.

With regard to the building of the Post-2025 ASEAN Community Vision, he urged that the bloc early consolidate the high-level task force and make thorough preparations so that the ASEAN Community can adapt to and effectively respond to emerging complex challenges amid the fast-changing geopolitical situation in the region and the world.

He recommended reinforcing solidarity, unity, dialogue, and cooperation to serve as the basis for a strong and resilient Community; upholding the bloc’s centrality; improving the effectiveness of ASEAN-led mechanisms; and keeping balance in its relations with partners, thereby contributing to regional and global peace, cooperation, and development.

Sơn also called for continued cooperation to narrow the development gap in the region and boost sustainable development and inclusive growth in sub-regions of ASEAN.

Sharing other countries’ concern about the complicated developments and unexpected incidents in the East Sea, the Vietnamese official stressed the importance of ensuring peace, security, and safety of navigation and overflight in the waters; complying with international law, including the 1982 UN Convention on the Law of the Sea (UNCLOS), so as to maintain the East Sea as a sea of peace, stability, and cooperation; continuing to fully and effectively implement the Declaration on the Conduct of Parties in the East Sea (DOC); and soon achieving a substantive and effective Code of Conduct (COC) that matches international law, including the 1982 UNCLOS.

Regarding the Myanmar issue, Sơn affirmed Việt Nam’s readiness to work with other countries to assist Myanmar to overcome these trying times, voicing support for the continued effective implementation of the Five-Point Consensus.

He also proposed stronger cooperation within ASEAN and between the bloc and partners to deal with emerging non-traditional security challenges, including those related to cyber security, maritime security, water resource security, climate change, and environmental pollution, as well as new challenges caused by the COVID-19 pandemic. — VnExpress News