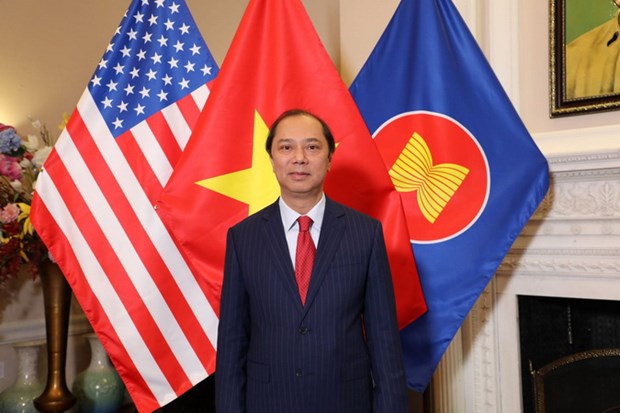 Vietnamese Ambassador to the US Nguyễn Quốc Dũng. — Photo baochinhphu.vn

WASHINGTON DC — Vietnamese Ambassador to the US Nguyễn Quốc Dũng has emphasised the significance of the ASEAN-US Special Summit, saying that the resolve of US President Joe Biden and ASEAN leaders to organise the event despite uncertainties in Europe, especially the conflict in Ukraine, demonstrates the importance they attach to the relationship.

He made the remarks during an interview with the Vietnam News Agency (VNA) ahead of Prime Minister Phạm Minh Chính’s trip to the US from May 11-17 to attend ASEAN-US Special Summit at the invitation of the US President and make a working visit to the US and the United Nations.

The ambassador said the year 2022 marks the 45th anniversary of the ASEAN-US partnership, and the event will be an occasion for the two sides to review their relationship, set out future cooperation orientations, and exchange views on regional and international issues of shared concern.

According to Dũng, pandemic containment and economic recovery are top priorities in cooperation between the two sides, stressing that apart from providing vaccines and medical supplies to ASEAN countries, the US has opened its US Centers for Disease Control and Prevention (CDC) Southeast Asia Regional Office in Hà Nội.

He noted that the US has also proposed initiatives to enhance economic cooperation with the ten-member grouping, including those to ensure sustainability and stability of supply chains such as the idea on the Indo-Pacific Economic Framework.

Ambassador Dũng is also optimistic about the good prospects for cooperation between Việt Nam and the US, which, he said, meets the interests of their people.

He explained that in the past, the bilateral economic ties have developed rapidly and effectively, with Việt Nam being the US’s biggest export and import market in the Association of Southeast Asian Nations (ASEAN), while the US remains Việt Nam’s largest export market. Leaders of the two countries have paid attention to promoting the economic relations, and always supported cooperation between their businesses, the diplomat added.

Việt Nam has developed rapidly and dynamically, and integrated deeply into the region and the world by joining many major regional and global free trade agreements, he said, noting that the country has been regarded as a safe and friendly destination.

Another reason for the good prospects is the strong development of Vietnamese enterprises, with many of them now able to meet high international standards. The ambassador added that several Vietnamese businesses have invested in big projects in the US.

According to the ambassador, among the 2.2 million strong Vietnamese community in the US, many are scientists and entrepreneurs, who work as a bridge between the two economies.

The ambassador said besides attending the summit, PM Chính is scheduled to engage in bilateral activities with the US side, including meetings with representatives from the US administration and parliament, businesspeople and scholars. He will also visit some high-tech facilities in the country.

“I am very optimistic about the prospects of economic cooperation between the two countries in the future,” he said. — – VnExpress News