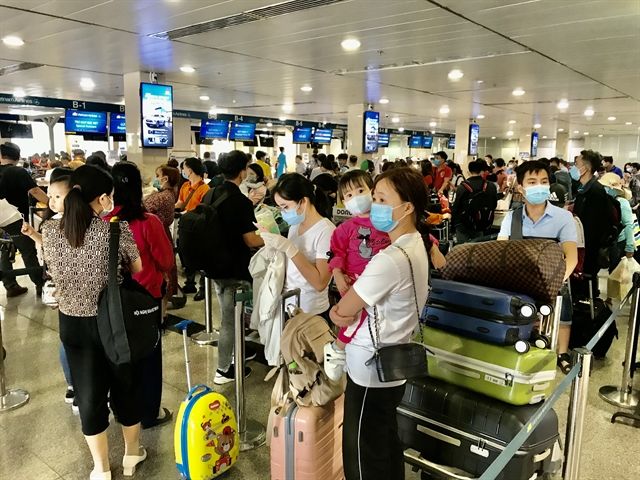 HCM CITY —  Prices of hotel rooms and flights to tourist hotspots around the country for the upcoming long holiday weekend have dropped by up to half in a series of last-minute deals.

Airfares from Hà Nội and HCM City to other tourist destinations such as Nha Trang, Đà Nẵng and Quy Nhơn have also dropped to VNĐ2-3 million.

Travel firms have attributed the drop in airfares to the fact that several carriers have increased flight frequency to meet passenger demand.

A representative of national flag carrier Vietnam Airlines earlier announced an increase of 2,700 flights with 524,000 seats during the holidays (from April 24 to May 4), mostly on domestic routes.

Bamboo Airways increased the number of seats on domestic flights by 15 per cent.

Hotels in major tourist destinations are also offering discounts prior to the holidays.

Prices of three-star hotels in Sa Pa, a popular tourist hotspot in the northern province of Lào Cai, were reduced by up to 30 per cent, while the price of villas in the Đại Lải resort in Vĩnh Phúc Province also dropped by 30 per cent.

The same discount has been recorded in popular beach destination Phú Quốc, which earlier had a shortage of rooms.

She said her company planned to sell several hotel rooms in Phú Quốc, but tourists opted for other destinations due to the high airfares, making them a challenge to sell.

To sell at the last minute, firms offered a discount of 30 per cent for the Phú Quốc travel package (including air tickets and five-star villas).

“This discount rate of 30 per cent is low, especially compared to the rate announced half a month ago,” she said.

Another cause for the drop in prices is the bad weather forecast across the country.

Bùi Thanh Tú, marketing director of BestPrice Travel, said travel companies tried to increase the prices of hotel rooms and airfares based on the high demand in previous holidays, causing a ‘fake’ shortage of hotels and air tickets.

However,  he said the prices were still higher than normal periods.

Travel firms have warned customers to be careful with super discounts, to avoid fraud.

Earlier trains and flights to tourist hotspots were almost fully booked for the holidays. Most flights from Hà Nội to Côn Đảo and Phú Quốc, two popular island destinations, were completely sold out.

National Reunification Day (April 30) and International Labour Day (May 1) fall on a weekend (Saturday and Sunday), so the two after are public holidays to compensate.

Việt Nam has lifted almost all travel restrictions, and opened up to international tourism on March 15 after a two-year interruption due to the pandemic. — – VnExpress News