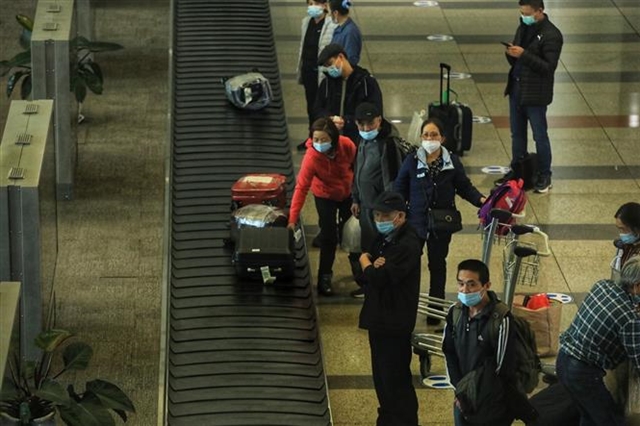 HÀ NỘI — Vietnamese airlines have seen a surge of 441 per cent in international passengers but a decline in domestic passengers in the first quarter of 2022, according to the Civil Aviation Authority of Vietnam (CAAV).

CAAV said Vietnamese airlines have transported an estimated 141,600 international passengers and 38,000 tonnes of international cargo in the first quarter, respectively soaring 441 per cent and 113.9 per cent year on year.

The number of international passengers passing through airports nationwide in the first quarter reached 321,000, up 176 per cent over the same period last year.

Airports also handled 292,000 tonnes of international cargo during the period, up 21.1 per cent.

Meanwhile, the carriers served about 6.5 million domestic passengers and 48,400 tonnes of domestic cargo, down 12.5 per cent and 8.8 per cent from a year earlier.

About 13 million domestic passengers and 98,000 tonnes of domestic cargo passed through Vietnamese airports during the three months, dropping 13.3 per cent and 5 per cent, respectively.

CAAV said as of March, there are 23 foreign and Vietnamese airlines operating 67 routes between Việt Nam and 20 countries and territories.

Compared to 2019 – before the COVID-19 pandemic broke out, regular air routes with eight foreign destinations have yet to be resumed, namely Brunei, India, Indonesia, Myanmar, Macau, Finland, Italy, and Switzerland.

From March 15, when Việt Nam fully reopened to international tourists, to March 21, the route linking with Singapore was the busiest with 45 round-trip flights, two flights more than the previous seven days and equivalent to 36 per cent of the frequency in the same period of 2019. However, the largest number of passengers, 10,300, was recorded on the route between Việt Nam and Japan, accounting for 18.1 per cent of the total.

The CAAV said the Government’s Resolution No. 32/NQ-CP, issued on March 15, on visa exemption for citizens of 13 countries has contributed to the growth of international passenger and cargo transportation.

However, the CAAV also pointed out that the aviation sector is facing pressure from rising fuel prices. Some carriers have proposed relevant agencies reduce import and environmental taxes on aviation fuel as well as some types of fees. — VnExpress News