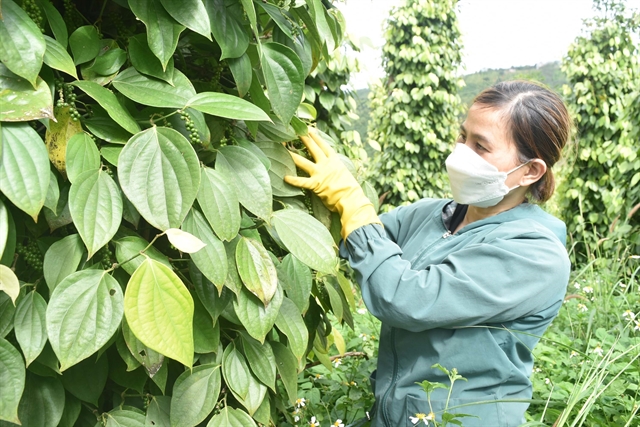 A farmer works on a pepper farm in the Central Highland Province of Đắk Lắk. Pepper is among products that enjoy high consumer demand in the African markets. — VNA/VNS Photo Nguyên Dũng

HÀ NỘI — African markets have a diverse demand for Vietnamese goods and most nations in the bloc appreciate and trust the quality of food products from Việt Nam, Nguyễn Thị Thu Thủy, deputy director of the Trade Promotion Agency, has said.

Thuỷ said the bloc needs to import a variety of food items to serve a rapidly growing population and improve people’s incomes while simultaneously offsetting the serious production impact caused by the pandemic.

Thus, there remains room for Vietnamese firms to boost their exports of food products, especially items which enjoy high consumer demand, such as processed coffee, pepper and rice, she said.

Ministry of Industry and Trade statistics show that Việt Nam exported US$2.24 billion worth of goods to Africa in 2021, up 20.4 per cent year-on-year. The country’s exports to the bloc in the first five months of 2022 saw a modest yearly decline of 3 per cent to $1.15 billion.

Rice is the major export product of Việt Nam to Africa, which accounts for 20 per cent of total export revenue generated from the market, which is also a promising land for Vietnamese coffee and peppercorn.

Việt Nam has been one of the five major suppliers of coffee in Africa, which spends about $750 million on importing coffee each year. Besides raw coffee, several Vietnamese processed coffee brands such as Trung Nguyên and King Coffee have attracted interest from many consumers in the region.

Hoàng Đức Nhuận, a Vietnamese Trade Counsellor in Algeria, said Vietnamese agricultural products have an advantage in Algeria, and Việt Nam is now one of the major coffee exporters to the market.

Vietnamese raw coffee current accounts for 50 per cent of the market share in Algeria, Nhuận told a two-day conference in the capital this week.

Algeria also has a high demand for Vietnamese spices such as pepper. In the five months this year, Việt Nam shipped $2.38 million worth of spices to the African nation.

However, Vietnamese products, especially coffee, are facing fierce competition from China, Thailand, India, Pakistan and other countries that have signed free trade agreements with Algeria. The situation is similar in other markets in the African region, Nhuận said.

He added that high logistics costs, differences in consumer habits and quality standards are a big problem for Việt Nam enterprises.

According to experts, despite the untapped potential of the African market, enterprises still have to face plenty of difficulties when exporting goods to Africa, such as transport and proper preservation of goods so they can be moved long distances whilst still maintaining their taste.

They said that underdeveloped trade procedures and regulations exist in most African countries, and competition from similar products from other Asian countries such as China, Thailand, and Indonesia can also bring the firms a headache.

To overcome these challenges, local firms should pay more attention to researching market needs to find products that meet demand and solve problems related to logistics.

They should also carefully study legal regulations in each country and information of its partners before signing contracts besides choosing safe payment methods to avoid risks, experts suggested.

To facilitate Vietnamese exports to markets in Africa, the Ministry of Industry and Trade (MoIT) said that it would closely follow the State directions on ensuring production activities, maintaining the supply chain, constantly expanding export markets, and ensuring supply from the import market while focusing on implementing solutions to help businesses effectively tap into these markets.

The MoIT said it would pay more attention to providing enterprises with updated information and guidance on market access to raise awareness about key developments and expand knowledge of new and niche markets.

The ministry will also promote trade activities and support businesses attending fairs and exhibitions online and in person. This is part of efforts to facilitate digital transformation and application of information technology in State management of trade and trade promotion.

Meanwhile, it will concentrate on improving the capacity of enterprises to respond to trade remedies of other countries and actively researching and proposing trade remedies to protect the interests of domestic industries.

It would also direct the Vietnamese trade offices and trade promotion offices in foreign markets to promptly inform businesses about the market situation to remove difficulties for enterprise import and export activities. — VNS

Banks asked not to force borrowers to buy insurance

First Vietnamese grapefruit exported to US