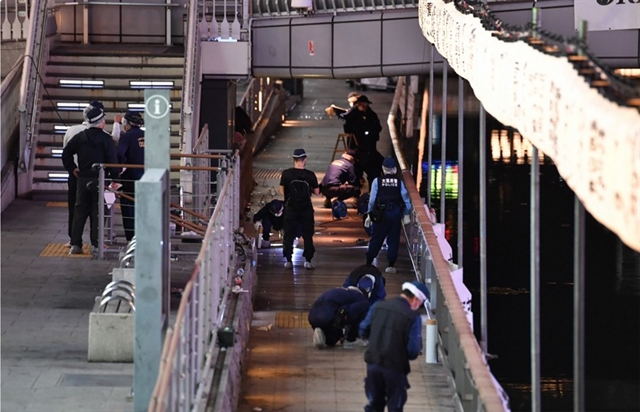 Police in Osaka, Japan examine a bridge in the Namba Parks area where a Vietnamese student was pushed into the Dotonbori River underneath and died. — Mainichi/VNA Photo

TOKYO — The procuracy agency of Osaka has proposed a sentence of 18 years in jail for a Dominican man who allegedly murdered a Vietnamese student in the Japanese prefecture.

Alberto was accused of “intentionally attacking and pushing the victim, who was no longer able to resist into the river”.

At the trial starting on May 16, Alberto denied the charge of murdering the Vietnamese student, T.T.A, in Osaka. His lawyer argued that the victim was the first to attack and that the defendant was only “justifiably defending”.

However, Osaka’s prosecutors presented clear evidence that the defendant intentionally attacked when the victim was completely unresistant, and then pushed the exhausted victim into the river. This is the main cause of the victim’s subsequent death. Therefore, the prosecutors insisted on the sentence of 18 years in prison for the defendant.

According to the indictment, on August 2, 2021, Alberto, a 26-years-old, unemployed man who has no fixed place of residence, beat and kicked the victim, T.T.A, an international student of Vietnamese nationality, into the Dotonbori River in Namba area in Osaka, causing the victim’s death on the evening of the same day. Three days later, Osaka police arrested the murderer and launched legal procedures against him.

The case angered the Vietnamese community in Japan.

The final sentence is scheduled to be officially announced on June 6. — VNS