Year that was: How Vietnam’s businesses survived historic difficulties

The Covid-19 pandemic made 2021 a challenging year for companies, but many managed to make strategic changes to overcome what were unprecedented restrictions.

The year started off on a positive note, and the Purchasing Managers Index hit 51.3 in January and climbed to 54.7 in April, despite the closure of several industrial hubs in the north due to the third wave of Covid, according to British information provider IHS Markit.

A score of above 50 indicates growth while below 50 means the sector is contracting.

In the first four months, the number of businesses that were set up surged by 17.5 percent year-on-year to 44,200, indicating an economic recovery.

Revenues from retail and services rose 10 percent to VND1,695.6 trillion ($73.94 billion) in the period, domestic tourism started to pick up and companies began to call for resumption of international flight routes to boost recovery.

But then came the fourth wave in April and set back businesses’ recovery.

With hundreds of new infections every day in the second quarter and thousands in the third, HCMC started to impose restrictions in June and kept them in place until September end.

Other southern localities too reported large numbers of cases, mostly of the Delta variant, and factories were forced to keep their workers on-site as travel was prohibited, a huge financial burden.

His company began to house 2,200 employees in mid-July, but a month later 400 went home because of safety concerns and the desire to be with their family.

The PMI fell to 40.2 in August and September, signaling the worst deterioration in the health of the manufacturing sector since April 2020, according to IHS Markit.

“Vietnamese manufacturers are facing a near-impossible task at present as the restrictions put in place to try and contain the spread of the Covid-19 outbreak in the country constrain their ability to produce goods,” Andrew Harker, economics director at IHS Markit, said at that time.

Since Vietnam is the second largest supplier of apparel, footwear and travel goods to the U.S., accounting for 20 percent of all that country’s imports, the American Apparel & Footwear Association in July called on the two countries’ governments to speed up vaccine distribution to major suppliers of Adidas, Gap and other brands.

But manufacturers plowed through the challenges by adopting various measures.

Phan Thi Phuong Linh, its human resources head, said the key factor was to totally isolate the premises from the outside world.

Delivery truck drivers were required to take photos of their documents, including negative Covid test results, and send them to security personnel, she added.

Other companies set up barriers to avoid direct contact.

Food and beverage companies did all they could to survive.

Crab restaurant chain Vua Cua suspended plans to open in new locations and instead focused on delivery and selling to supermarkets.

It was able to find franchisees for the delivery model and tie up with a large supermarket chain, CEO Doan Thi Anh Thu said.

“We no longer have headaches like dealing with finance and human resources issues, and focus all our energies on helping franchisees sell”.

In June The Coffee House launched new products like instant milk coffee bags and cans, which it sells through supermarkets, convenience stores and online platforms.

“The average rent was VND240 million per month per location and we cannot keep paying,” he said.

On Bui Vien Street in the backpackers area in downtown HCMC, bars and beer parlors started selling fruits and vegetables instead of beer and wine to survive.

The return to normalcy began on October 1 when HCMC started to ease restrictions after four months.

Factories immediately restarted production to make up for the downtime, and the PMI surged to a five-month high of 52.2 in November.

In early October, electronics producer Datalogic Vietnam saw its workforce swell from 40 percent of normal strength to around 60 percent.

“We plan to welcome employees back to the factory and recruit [more], and expect productivity to return to 80 percent in the final months of the year,” CEO Tran Tien Phat said at the time.

Around 1.3 million workers had returned to their hometowns in the third quarter, and so companies had to offer increased salaries and benefits to get them back for end-of-year production.

New business registration rebounded sharply in November, with an increase of nearly 45 percent from October.

Aviation, the worst affected sector this year, is also hoping for a grand bounce back next year, and Vietnam Airlines the started the first regular U.S.-Vietnam direct service and Bamboo Airways is planning to launch direct flights from HCMC to Melbourne in Australia next year.

Vietnam’s economy was actively recovering with a rebound in industrial production and retail sales, continued trade surplus and stabilized credit growth, the World Bank said in an update November.

Nguyen Minh Cuong, principal country economist of the Asian Development Bank, has suggested that Vietnam should increase its stimulus from 2 percent of GDP to 5-7 percent to help businesses recover quickly. 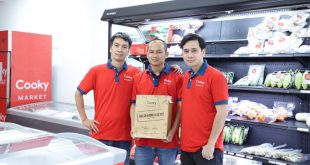