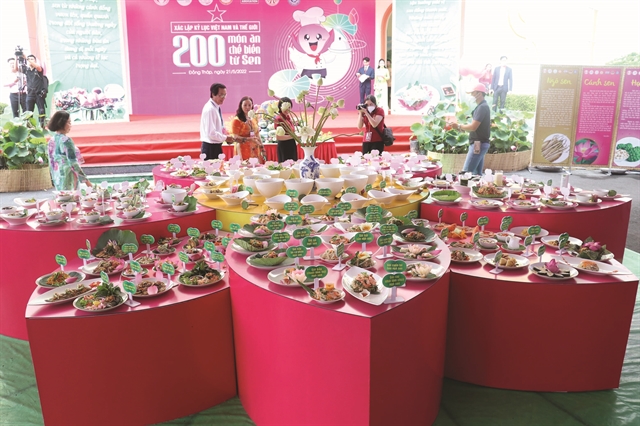 Some 200 dishes made from lotus on display at the Đồng Thap Lotus Festival 2022. — VNA/VNS Photo Nguyễn Văn Trí

The World Record has been awarded to the Mekong Delta province of Đồng Tháp for hosting the largest event on the processing and presentation of 200 lotus-based dishes.

A WorldKings decision on the recognition has also been presented to the provincial People’s Committee.

Boasting large lotus growing areas and rich culinary culture, Đồng Tháp organised the festival to introduce domestic and foreign friends to various Vietnamese specialities through the country’s culinary quintessence in general and the locality in particular.

At the first Đồng Tháp Lotus Festival 2022, themed “Lotus of a New Day”, 10 culinary experts and 50 chefs were on hand to process and present hundreds of delicacies made from various parts of the lotus plant, such as lotus root, lotus flower stem, lotus leaf, lotus seeds and lotus seed heart.

After completion, 200 dishes were presented in the shape of a 10-petal blooming lotus.

Đồng Tháp Province plans to expand lotus farming, increase the value of lotus products and promote tourism based on visits to lotus fields.

The delta’s largest lotus-growing province plans to increase the area under the flower from the current 800ha to 1,350ha by 2025.

Lotus farming requires low investment but fetches incomes of four to six times higher than rice, according to farmers.

Besides fresh flowers, seeds and roots, the province also produces various types of lotus-related products such as essential oil, cosmetics, wine, milk, tea and other beverages, and food.

The province, well known as the land of pink lotuses, has developed tourism products such as visiting lotus fields and foods made from the flower.

Lotus is one of the five key products in the province’s agriculture restructuring plan, as products made from the flower have been exported, providing high incomes for farmers.