VNPT pledges to sponsor 31st SEA Games with IT support 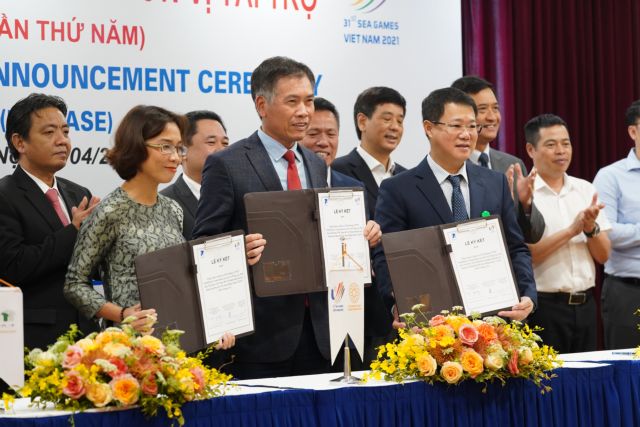 (From left to right) Trần Thùy Chi, chairwomen of the Board of Directors of Vietcontent, SEA Games marketing and sponsorship unit, Trần Đức Phấn, deputy head of SEA Games Organising Committee and Nguyễn Trường Giang, general director of VNPT – VinaPhone Corporation pose for a photo after their sponsorship signing ceremony. — Photo of Vietcontent

HÀ NỘI — Vietnam Posts and Telecommunications Group (VNPT) has become the seventh diamond sponsor of the 31st Southeast Asian (SEA) Games, which will be held in Hà Nội next month.

VNPT and the SEA Games organisers signed a sponsorship deal valued at almost VNĐ18 billion (US$784,000) in the capital city yesterday.

Following the contract, VNPT will fund different packages, including an internet channel, operation and supervision at the main media centre (MMC), a card centre, an e-sports hub and 37 competition locations at all 12 host cities and provinces.

VNPT will also carry out the international IT and internet systems at the MMC and the International Broadcast Centre.

The company will contribute equipment while their technicians will be available to support organisers in inputting competition results throughout the 31st Games.

He said he appreciated VNPT’s important technology contribution to national sports events, especially the SEA Games in May.

Tô Dũng Thái, chairman of the Board of Members of VNPT Group, said: “It is a pleasure to be the sole network operator to support the Games. It is an honour and responsibility of the nation’s largest IT corporation to accompany the country’s digital transformation, enhancing Việt Nam’s position in the region and world.”

“VNPT is committed to providing the most modern technology solutions for the success of the regional largest sports meet.”

The company representatives said all packages would be carried out after the signing, while many promotions for mobile data packages, MyTV TV service and VNPT wifi will kick-off so that sports fans can comfortably enjoy the 31st SEA Games.

It is the second time that VNPT has shaken hands with SEA Games organisers, after the first time when Việt Nam hosted the Games in 2003.

The Hà Nội SEA Games will be held in the capital from May 12-23 and 11 nearby localities.

Việt Nam will welcome almost 10,000 competitors, coaches and officials, and international media and friends to the Games. — VnExpress News