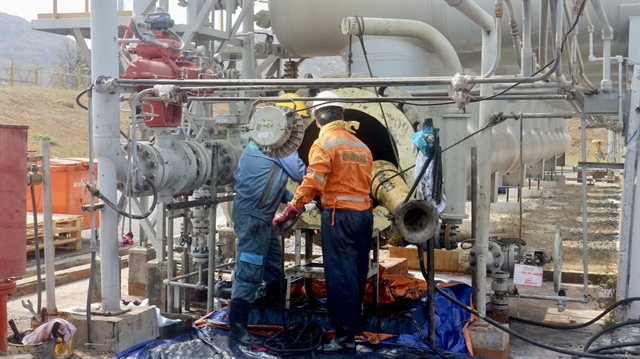 On the Hồ Chí Minh Stock Exchange (HoSE), the VN-Index fell 21.73 points, or 1.55 per cent, to 1,384.72 points. The index reversed the morning’s course as selling force surged in the last minutes of the afternoon session. It fell for the fifth straight session.

The market’s breadth remained negative with only 76 stocks on the southern bourse increasing, while 381 stocks declined, of which 99 stocks hit floor prices.

Liquidity was also lower compared to the previous session, with over VNĐ20.5 trillion (US$893 million) worth of shares, equivalent to a trading volume of more than 688.3 million shares, traded on HoSE.

The market benchmark extended its downtrend due to persistent strong selling force. The VN30-Index, tracking the 30 biggest stocks on HoSE, also posted a loss of 5.11 points, or 0.35 per cent, to 1,435.5 points.

In the VN30 basket, ten stocks climbed, while 16 stocks slid with one stock hitting the maximum daily loss of 7 per cent. And four stocks stayed unchanged.

Data compiled by vietstock.vn showed that PV Gas (GAS) led the bearish trend with a fall of 6.41 per cent. It was followed by Việt Nam Rubber Group (GVR) and Vinhomes (VHM), of which GVR was the one hitting the floor price, while VHM plummeted more than 3 per cent.

The index was also weighed by the negative performance of realty and bank stocks such as Becamex (BCM), Saigon Hanoi Commercial Joint Stock Bank (SHB), VPBank (VPB) and Techcombank, down in a range of 1.5-7 per cent.

On the other hand, there were some stocks moving in the opposite direction with outstanding performance like Masan Group (MSN), up 3.15 per cent, Sabeco (SAB), up 1.84 per cent, and Vietnam Airlines JSC (HVN), up 1.12 per cent.

During the session, more than 99 million shares were traded on the northern market, worth more than VNĐ2.3 trillion.

Meanwhile, foreign investors continued to be net buyers on both main exchanges, with a total net value of VNĐ460.08 billion. Of which, they net bought a value of VNĐ439.3 billion on HoSE and VNĐ20.78 billion on HNX. VnExpress News

Previous Time to upgrade US-Vietnam relationship, says US envoy
Next Retailers team up to reduce consumption of single-use plastic bags