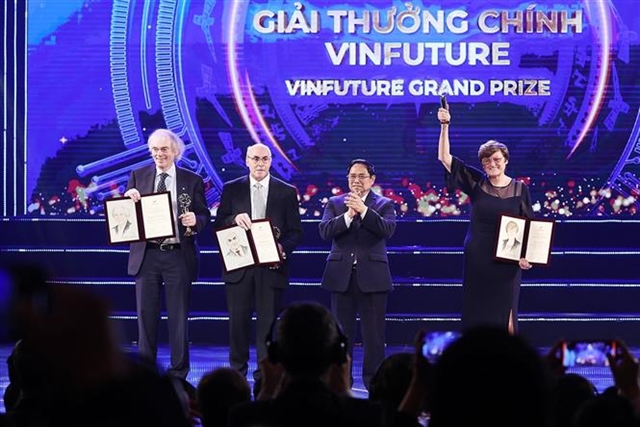 HÀ NỘI — The long-awaited winners of the first Vinfuture Prize has been officially announced at an award ceremony held in Hà Nội Opera House.

Speaking at the opening ceremony, the Prime Minister emphasised the importance of science for development.

“In the development history of mankind, scientists have changed the world”, the PM said.

“Today we honour the winning works, honour sciences contribution to mankind and honour scientists who spend their lives on research with exceptional minds, passion and great service.

“In Việt Nam, sci-tech development is a priority, a breakthrough strategy to develop economy and society,” PM Chính said.

The inaugural VinFuture Grand Prize, worth US$3 million, was given to Hungarian-American Professor Katalin Kariko, American Professor Drew Weissman and Canadian Professor Pieter Rutter Cullis for their contribution in fighting the COVID-19 pandemic with the research on mRNA vaccine.

In their research, they were able to modify mRNA and encapsulate it in lipid nanoparticles, preventing the immune system from reacting to foreign mRNA entering the body and avoiding cytokine induction, toxicity, and off-target effects.

Based on Kariko and Weissman’s discovery, and Cullis’s development of lipid nanoparticles, pharmaceutical companies like Pfizer-BioNTech and Moderna were able to produce effective COVID-19 vaccines in record time.

Besides serving as a global line of defence against the increasing infections and deaths caused by the pandemic, mRNA technology also has the potential to generate vaccines against HIV, cancer, autoimmune diseases and genetic diseases, potentially saving the lives of billions of people in the future.

The first VinFuture Special Prize for Innovators with Outstanding Achievements for Emerging Fields was awarded to Professor Omar Mwannes Yachi for the discovery of metal-organic frameworks (MOFs).

Professor Shenan Bao won the second VinFuture Special Prize for Female Innovation for the development of thin-film flexible organic electronics and its application to a range of bio-interfacing and sensing applications.

The third VinFuture Special Prize for innovators from developing countries was awarded to a pair of scientists from South Africa, Professor Quaraisha Abdool Karim and Professor Salim Abdool Karim, for their research on Tenofovir gel to fight against HIV.

On behalf of the Prize Laureates, Professor Katalin Kariko said: “It is an incredible honour to learn that the Prize council selected me, together with my fellow scientists Drew Weissman and Pieter Cullis, to receive the inaugural VinFuture Grand Prize.

“We, as scientists, work at the bench in the laboratory, performing experiments day-after-day and hope that one day – maybe in our lifetime – we can witness that the advancements we made will be beneficial for the common good.

“We hope that our scientific adventures will also inspire the next generation of researchers and doctors, and that their contributions will advance our scientific knowledge on a higher level leading to the treatment of patients with unmet medical needs.”

The VinFuture Prize Foundation was founded by Vingroup chairman, billionaire Phạm Nhật Vượng, and his wife, Phạm Thu Hương, to unlock the potential of developing nations on the back of sci-tech innovations.

The Foundation’s core activity is awarding the annual VinFuture Prize for breakthrough scientific and technological innovations that have made, or have the potential to create, meaningful changes in people’s lives.

Global leading scientists value the VinFuture Prize and consider it one of the world’s most advantageous annual science and technology awards for its impact on economic and social development.

“The VinFuture Prize 2021 recognises truly outstanding scientific work that has made, and will make, a positive impact on the lives of millions, or even billions, of people around the world,” Professor Sir Richard Friend, VinFuture Prize Council Chair, said at the event.

“The winners have brought new solutions for some of the most significant challenges that humanity is facing, such as infectious diseases and meeting the urgent need for zero-carbon energy.

“The VinFuture Prize celebrates the power of science and technology to solve global problems.”

For its first award round, the organising board received over 1,200 entries from 654 leading universities, 51 well-known research institutes and 42 national science academies globally. Among the 599 innovations in the competition, about 100 are made by the top 2 per cent of the most-cited scientists in the world. Female scientists in the event accounted for 34.3 per cent of the total, many of them winners of Nobel, Breakthrough, Tang and Japan prizes.

The competition drew participants from 60 countries globally; 52.6 per cent of the projects are from North America and the European Union. Việt Nam also joined with 17 projects. The result far exceeded expectations for a brand new prize like VinFuture.

The closing event of the Sci-Tech Week is the ‘Scientific Dialogue with the inaugural VinFuture Prize Laureates’, which will be held at VinUniversity in Hà Nội today morning. VnExpress News