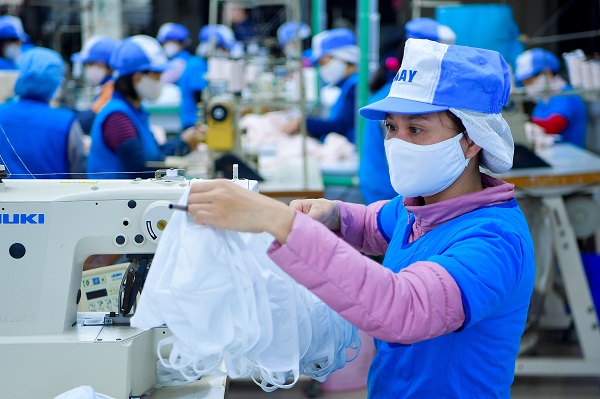 Vinatex’s net revenue from sales and services in the last three months of 2021 reached over VNĐ4.98 trillion, a year-on-year increase of 39 per cent. — Photo vinatex.com.vn

HÀ NỘI — Vietnam National Textile and Garment Group (Vinatex)’s post-tax profit in the last quarter of 2021 was nearly VNĐ500 billion (US$22.03 million), tripling the figure recorded in the same period of the previous year.

The group reported net revenue of over VNĐ16.09 trillion last year, up nearly 16 per cent year-on-year, and net profit of VNĐ857 billion, representing a 2.6-fold rise.

The marked results in the fourth quarter are attributable to the acceleration of production after disruptions due to the COVID-19 pandemic, and material stockpiling since mid-2021 in anticipation of soaring prices, a representative from the group explained.

The group’s net revenue from sales and services in the last three months of 2021 reached over VNĐ4.98 trillion, a year-on-year increase of 39 per cent.

Its turnover from financial activities also jumped by 44 per cent to VNĐ94.7 billion.

Previous Firms pulling out of land auction deals hurts market and consumers
Next Bình Dương-based businesses need up to 50,000 labourers