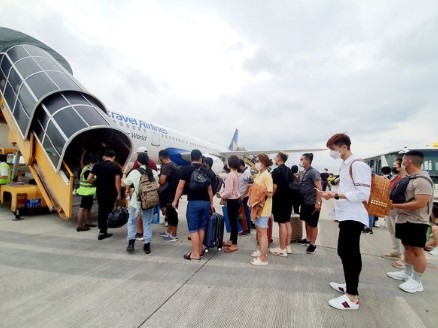 HÀ NỘI — Vietravel Airlines has become the official airline partner for the upcoming 31st Southeast Asian Games (SEA Games 31) following an agreement signed between the carrier and the organisers on May 5.

It forms part of the airlines’ drive to contribute to the development of sport in Việt Nam and its regional neighbours.

Under the deal, Vietravel will fly Vietnamese medal hopefuls to their competition destinations during the region’s biggest sports event, and cooperate with Vietravel Holdings’ ecosystem to hold a Walking Tour in Hà Nội for both local and foreign athletes during the games.

Vietravel Airlines is honoured to be the official airline partner for SEA Games 31, said Director-General Vũ Đức Biên. The sponsorship harmonises with the company’s future direction since it has been working closely with authorities to expand domestic and international flight networks, he said.

He added that the Walking Tour aims to provide an opportunity for the athletes to explore the beauty of Việt Nam’s nature, people, culture and cuisine.