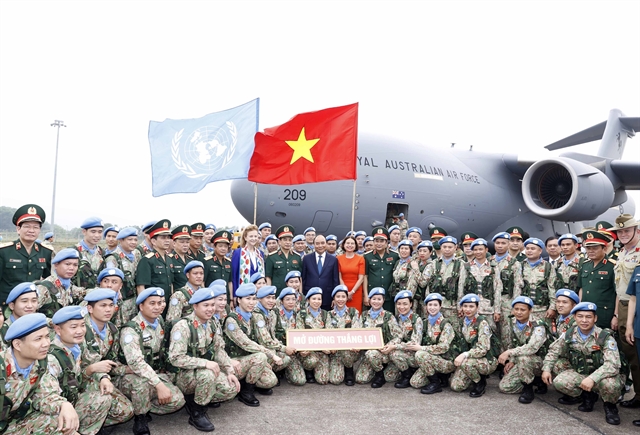 Departing on the mission are 184 officers and soldiers of Military Engineering Unit No.1 and 63 of the Level-2 Field Hospital No.4. This is the first time Việt Nam has sent military engineers to join UN peacekeeping efforts.

Also in attendance were the UN resident coordinator, head of the EU delegation, ambassadors and defence attachés of foreign countries to Việt Nam.

Addressing the event, President Phúc acknowledged the positive results that the Vietnamese military has achieved on previous UN peacekeeping missions, which has been highly regarded by communities and the UN.

It could be said that Việt Nam’s participation over the past eight years has been a highlight in the multilateral foreign policies of the Government, Party and military, he added.

The President also extended his gratitude to the UN, partner countries and organisations that have contributed to the country, and hopes that Việt Nam will continue to receive support during peacekeeping missions.

Presiding over the ceremony, defence minister General Phan Văn Giang said: “During the missions, officers and soldiers will always maintain their solidarity, unity, determination to overcome challenges, and strive to fulfil the tasks assigned.

“They will be the true envoy of peace, the symbol of humanism, international solidarity, the embodiment of the noble qualities in a ‘soldier of Uncle Hồ’ in the new era, the multinational, multicultural environment of the UN.”

Despite the complicated developments of COVID-19, the field hospital staff have completed the medical, military and language training programme in preparation for the deployment.

During their mission in South Sudan, the Level-2 Field Hospital No. 4 will focus on applying technology in medical examination and treatment, which will be the premise for them to conduct scientific research.

The hospital will also continue working on public communications and disease prevention in the harsh environment of the area.

The 184 staff members of Military Engineering Unit No.1 will help provide humanitarian assistance, supporting the UN delegations in keeping and re-establishing peace in the area.

They will also ensure transport, perform road maintenance, help reconstruct the UN base, and provide support for the local community by building community houses, schools, and other public facilities.

Taking into account the latest deployment, Việt Nam’s military has sent a total of 76 officers on individual duties, and 426 soldiers in groups on UN peacekeeping missions. — VnExpress News