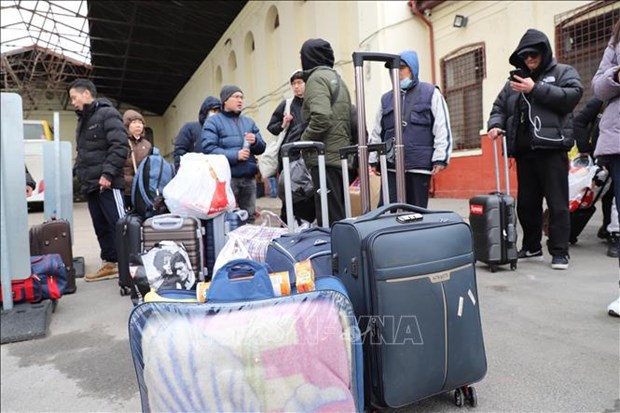 BERLIN – The Vietnamese Embassy and many associations and individuals in Germany are promptly providing support to Vietnamese people who evacuated from war zones in Ukraine to Germany after the country and other member states of the European Union (EU) decided to receive and grant evacuees from Ukraine temporary protection.

The embassy sent officials to the main station and Đồng Xuân Trade Centre in Berlin to check the situation and talk directly with evacuees, who said they needed to find temporary accommodation and be guided through procedures to enter refugee camps.

Evacuees also wanted to be provided with information about German regulations and procedures for refugees from Ukraine, and soon have passports and necessary documents for their temporary residence in Germany.

A rapid response team of the embassy has been set up in order to develop a timely plan for handling arising problems, and at the same time coordinate with the Vietnamese Consulate General in Frankfurt in related matters.

The agency has also posted information and regularly updated Germany’s regulations and procedures for evacuees from Ukraine on its homepage as well as on community newspapers.

A hotline of the embassy has been also active to promptly guide and support Vietnamese evacuees.

It has also proactively connected with Vietnamese associations, organisations and individuals, thus providing timely assistance to Vietnamese people from Ukraine.

According to figures released by the Federal Ministry of the Interior of Germany on March 18, the European country has so far received about 197,000 evacuees from Ukraine, including Vietnamese people.

Another 259 Vietnamese from Ukraine arrive home on flight from Poland

This is the third free-of-charge flight from Poland to repatriate Vietnamese citizens leaving Ukraine. The first two, on March 9 and 12, carried nearly 600 people, many of whom were children, women, and elderly people.

Vietnamese Ambassador to Poland Nguyễn Hùng described the repatriation flights as the clearest demonstration of the Party and State’s attention to overseas Vietnamese, adding that the acts also reflected the sentiment of the Vietnamese community in Europe, including those in Poland, towards the evacuees from Ukraine.

Statistics from the Polish Border Guard show that more than 2,800 Vietnamese people from Ukraine have entered Poland so far. VnExpress News