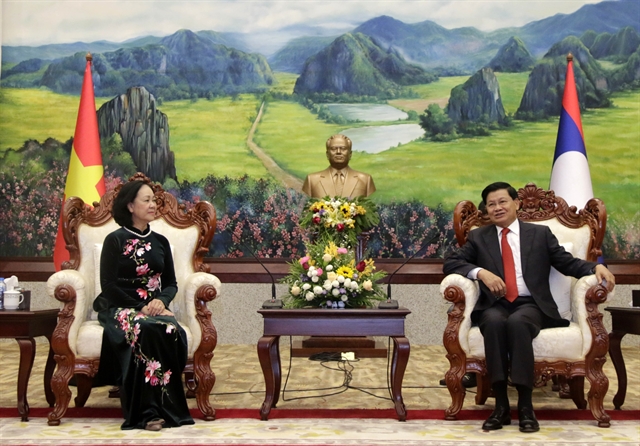 VIENTIANE — Trương Thị Mai, Politburo member, Secretary of the Communist Party of Việt Nam (CPV) Central Committee and head of its Organisation Commission, led a high-ranking Vietnamese delegation to visit Laos from May 30 to June 1.

The visit was made at the invitation of Sisay Leudetmounsone, Politburo member, Secretary of the Lao People’s Revolutionary Party (LPRP) Central Committee and head of its Organisation Commission.

Mai congratulated Laos on the great, comprehensive achievements the country has recorded over more than 35 years of reform and in implementing the resolution adopted at the 11th Party Congress and the 9th five-year socio-economic development plan.

She affirmed Việt Nam’s support for the reform cause in the neighbouring country and expressed her hope that under the leadership of the LPRP, the management of the Lao government and the supervision of the NA, the Lao people would reap greater achievements.

Mai noted the continuous development of the Vietnam-Laos special solidarity across spheres and thanked Laos for its support for Việt Nam during past struggles for national independence and reunification, as well as the present cause of national construction and defence.

The official cited Party General Secretary Trọng’s view on the significance of the special solidarity and the need to raise the efficiency of bilateral cooperation in different areas.

Briefing the Lao leaders on the outcomes of her talks with Sisay Leudetmounsone, Mai said the CPV Central Committee’s Organisation Commission was ready to work with its Lao counterpart to enhance the exchange of information and experience in Party building and closely coordinate on agreements reached between the two Parties and countries.

The Lao leaders said Mai’s visit, which is taking place in the Vietnam-Laos Solidarity and Friendship Year 2022, vividly demonstrated the relationship.

They congratulated Việt Nam on its achievements over the past time, especially in the COVID-19 fight, socio-economic reopening and international integration, and the country’s successful organisation of the 31st Southeast Asian Games in May.

The hosts noted their hope that the Vietnamese people would gain more attainments in reform and successfully materialise the resolution adopted at the 13th National Party Congress under the CPV’s leadership.

They thanked Việt Nam for its great, valuable, sincere, effective and timely support for Laos.

The Organisation Commissions should step up the sharing of information and experience in Party and political system building, apparatus organisation, and personnel training.

The leaders pledged to make every effort, together with Việt Nam, to preserve and promote the special solidarity and suggested the two sides coordinate in the implementation of agreements, and work to improve the efficiency of collaboration, particularly in economy, trade and investment, and organise activities marking the Solidarity and Friendship Year.

They asked Mai to convey their regards to Party General Secretary Nguyễn Phú Trọng and other Vietnamese senior leaders.

During their talks earlier the same day, Mai and her Lao counterpart Sisay Leudetmounsone informed each other about the situation of each Party and country and reviewed cooperation between the two commissions.

They discussed the cooperation direction in the time ahead to contribute to Party resolutions in each country.