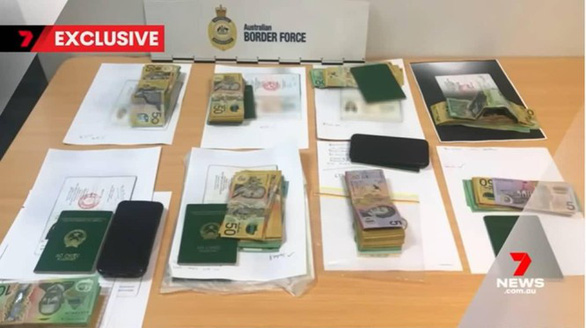 The cash and Vietnamese passports seen in the footage by 7News allegedly belonging to Vietnam Airlines attendants during a raid by the Australian Border Force. — Photo from 7News

HÀ NỘI — The Civil Aviation Authority of Vietnam (CAAV) has confirmed that through local media of Australia, the authority has learnt about a case in which nine Vietnamese flight attendants were questioned by Australian authorities after they were found carrying loads of cash and suspected to be involved in money laundering.

CAAV Director Đinh Việt Thắng said on Saturday that the authority has yet to received any formal notice from Australian side, and it has requested national-flag carrier Vietnam Airlines to make a report clarifying the case.

A Vietnam Airlines spokesperson said its flight crews and attendants are working normally, and the airline has asked Australian authorities for more information about the incident.

Earlier, Australia’s 7News channel reported that nine flight attendants of an airline had been questioned by Australian authorities during a raid by the Australian border force and police.

These flight attendants have been questioned after they were found bringing a total of AUD60,000 (some US$41,600) hidden among their personal luggage.

7News did not mention the name of the carrier or personal details of the attendants who were suspected of committing money laundering.

According to the CAVV leaders, the case is “not very serious,” so that all the attendants have flown home in two different flights.

Under Australia’s regulations, every foreigner bringing along AUD10,000 ($6,935) or an equivalent amount in other currencies when they enter or leave the country must make a declaration, otherwise they will be subject to fines or imprisonment.