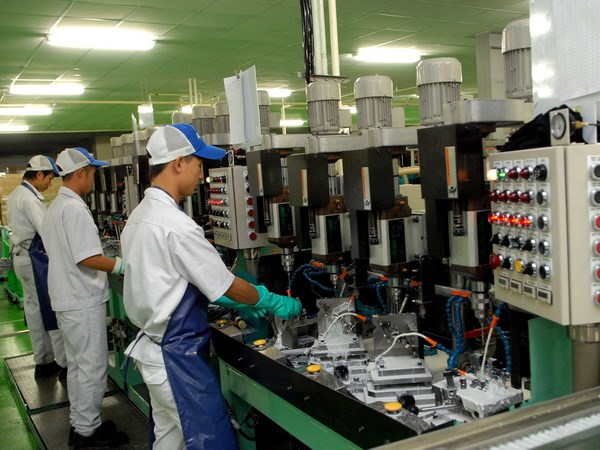 An auto component production line of Keihin Vietnam Co Ltd. The issues around the pandemic and price rises also impacted new orders at the end of the first quarter. — VNA/VnExpress News Photo

HÀ NỘI — The Việt Nam Manufacturing Purchasing Managers’ Index (PMI) dropped to 51.7 in March from 54.3 in February, as the latest wave of the COVID-19 pandemic led to widespread labour shortages in the manufacturing sector during March, according to S&P Global.

In a report released last week, S&P Global said that although the situation still pointed to an overall strengthening of business conditions, the latest improvement was the least marked in the current six-month sequence of growth.

Central to the slowdown in the rate of improvement overall was the current wave of the COVID-19 pandemic in Việt Nam. One of the main impacts on firms came in the form of widespread infections among workers, resulting in a first decline in employment in four months, according to the report.

Staff shortages meant that firms were unable to maintain production volumes, with output falling for the first time in six months. Inflationary pressures also contributed to the drop in production, which was nonetheless only modest as some firms expanded output in line with higher new orders.

Difficulties raising production due to labour shortages led to a further accumulation of backlogs of work, with the latest increase the most marked since September last year.

The report said the issues around the pandemic and price rises also impacted new orders at the end of the first quarter. That said, both total new business and new export orders increased for the sixth month running.

Efforts to keep up with order requirements were helped by the use of inventories given difficulties with production. As a result, stocks of finished goods decreased for the first time in three months.

The aforementioned inflationary pressures were highlighted by both of the survey’s price indices in March.

The rate of input cost inflation surged higher, reaching the fastest in close to 11 years. More than half of all respondents signalled that their input prices had risen over the month, with higher costs for oil and gas mentioned in particular. Rising shipping and raw material prices were also cited.

In turn, manufacturers raised their selling prices at an accelerated pace. The increase was the fastest since last November’s ten-and-a-half year high.

Although purchasing activity rose slightly in March, the rate of growth slowed sharply and was the weakest in the current six-month sequence of expansion. Stocks of purchases were also up modestly. With current production requirements falling, any inventory building largely reflected efforts to accumulate reserves.

A range of factors led to longer suppliers’ delivery times in March, including the effects of the COVID-19 pandemic such as labour shortages and restrictions at the border with China. The war in Ukraine also acted to delay deliveries, with lead times lengthening to the greatest extent since last October overall.

According to the report, the severity of the latest wave of the COVID-19 pandemic and worries about inflationary pressures acted to dampen expectations for the future. Business confidence dropped to the lowest in six months. However, firms remain optimistic that output will rise over the coming year, based on hopes that the pandemic will fade and new orders expand.

Andrew Harker, Economics Director at S&P Global, said: “The surge in COVID-19 cases in Việt Nam during March took its toll on the manufacturing sector, pushing output back into contraction territory. This was primarily due to labour shortages, as so many workers were off with infections that factories were unable to maintain production volumes.

“While firms will be hoping that infection levels start to ease soon, providing some alleviation on that front, the war in Ukraine provides a further headwind. The most noticeable impact for Vietnamese firms in March was on prices. Input costs increased at the sharpest pace in almost 11 years on the back of higher costs for oil and gas following the outbreak of war. This has dashed any hopes that inflationary pressures might be set to ease over the months ahead.” — VnExpress News