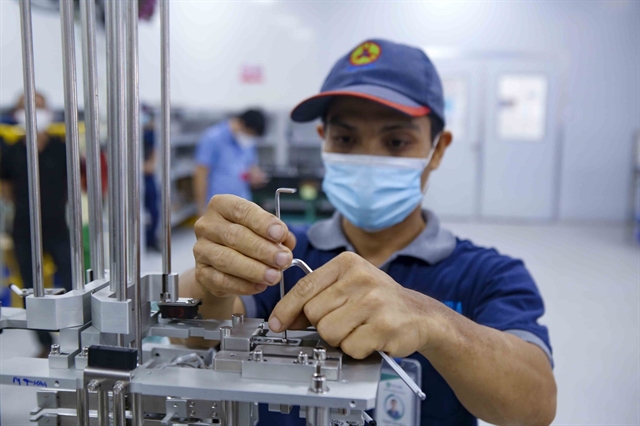 In a report released on Tuesday, IHS Markit said the Vietnam Manufacturing Purchasing Managers’ Index (PMI) posted 54.3 in February, up from 53.7 in January and signalling a pick-up in growth for the fourth month running.

Business conditions have now improved in each of the past five months following the disruption caused by the Delta wave of the COVID-19 pandemic in 2021.

According to the report, the improving growth momentum overall was again supported by stronger customer demand. New orders increased sharply and the rate of expansion quickened to a ten-month high. Improving international demand was also reported in February, helping lead to another marked rise in exports.

Higher new orders and stable business conditions contributed to a fifth successive increase in manufacturing production. As was the case with new business, the rate of expansion in output was the most marked since last April.

Hopes of continued new order growth should the COVID-19 pandemic be brought under control supported optimism in the year-ahead outlook for production, with more than half of respondents expecting output to increase over the coming year.

The report noted supply issues continued to constrain output growth, however. Although manufacturers increased employment for the third month running in February, the rate of job creation remained modest amid ongoing reports of workers not having returned from their hometowns due to the pandemic.

A further marked lengthening of suppliers’ delivery times was also recorded, although disruption remained much less pronounced than during the Delta wave of the pandemic. Where lead times lengthened, respondents linked this to shortages of materials and staff, as well as issues with international shipping.

These constraints, alongside marked growth of new orders, led backlogs of work to increase in February following broadly no change in January.

The passing on of increasing cost burdens resulted in another rise in selling prices, the eighteenth in as many months. The rate of inflation also ticked up from that seen in January.

Input buying rose sharply in February as firms attempted to secure inputs to support growth of production. In turn, stocks of purchases increased at the fastest pace in ten months, and to one of the largest extents on record.

Stocks of finished goods also rose midway through the first quarter, albeit marginally. Respondents indicated that the increase reflected not only higher new orders, but also difficulties shipping finished products to customers amid transportation issues.

Commenting on the latest survey results, Andrew Harker, Economics Director at IHS Markit, said: “The Vietnamese manufacturing sector continued to demonstrate resilience in the face of the COVID-19 pandemic in February, with growth of both demand and production gathering further momentum.”

“It’s not all good news, however, as supply constraints restrict output growth. Firms are still having difficulty enticing workers back to factories in large enough numbers to keep on top of workloads, while raw materials remain scarce. Manufacturers will therefore be hoping that these constraints ease in the months ahead and unleashing production in the process,” he concluded. — VnExpress News