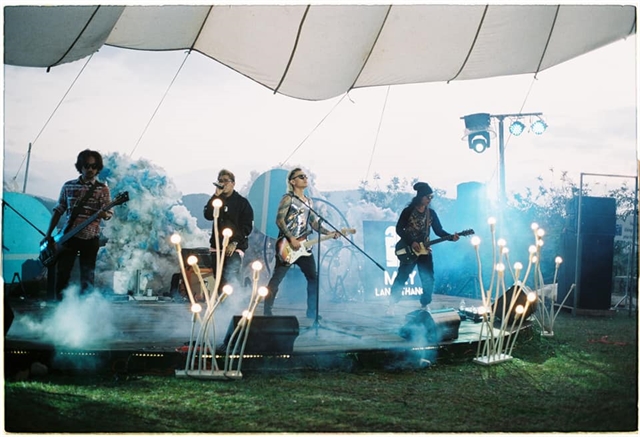 Microwave will perform at the Ride 2 Rock concert. Photo courtesy of the band

THANH HÓA  Leading rock bands and singers will perform in the Ride 2 Rock concert tomorrow in the northern central province of Thanh Hóa.

The show will feature bands like Ngũ Cung, Microwave, Metanoia, Chú Cá Lơ, Mèow Lạc and Re-cycle, as well as singers Phạm Anh Khoa and Nguyễn Đức Cường, among others.

The show is the first in a series of Ride 2 Rock shows that will be held in many cities and provinces across the country, the biggest series of rock shows ever in Việt Nam.

Representing the organising board, painter Khánh Art said the event will be accompanied by the Northern Motors Club. Hundreds of Harley Davidson motorbikes will join a parade as part of the show.

“We have invested more than VNĐ4 billion (US$174,000) for the upcoming concert in Thanh Hóa Province. This will be the largest rock event in the country with a big stage (50m wide, 16m high) and complicated lighting and sound systems, meeting the standard of a world music show,” said Khánh Art.

He said that investment in such a “huge” stage is not to show off. The organisers just want to put rock in the place it deserves.

“We want a rock renaissance, I want rock singers and musicians to be proud that we get to enjoy the very best of music and entertainment,” he said.

Explaining why the event has the participation of the Northern Motors Club, Khánh Art said he finds many similarities between the lifestyle of rockers and motor riders. Many rockers ride motorbikes and love rock music, so it’s a wonderful chance to combine rock music and powerful motorcycles — two symbols of strength, open-mindedness and freedom.

Director Trần Thắng said each show will be organised in a city/province and the music performed at the show will have typical features of that location. For example, the first show is organised in Thanh Hóa where Hò Sông Mã (Mã River Chanties) are very famous. So, the melody of this folk singing will be brought to the show.

The programme will start at 6pm tomorrow at Thanh Hóa Radio and Television Exhibition Centre. The ticket price is ranged from VNĐ200.000-500.000 (US$2-5).