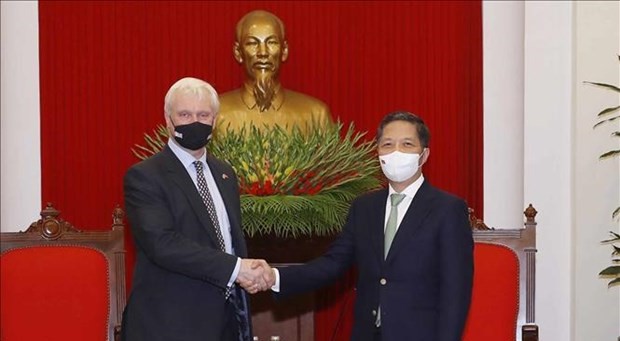 At the reception, Anh expressed his pleasure at the growing Việt Nam–UK strategic partnership and thanked the UK for assistance in Việt Nam’s COVID-19 response.

He said that Việt Nam supported the UK in strengthening its economic and trade cooperation with the region and was willing to share information and experience in joining the Comprehensive and Progressive Agreement for Trans-Pacific Partnership (CPTPP).

Stressing Việt Nam’s determination to implement its commitments at the 26th United Nations Climate Change Conference of the Parties (COP26), he hoped the two nations would further strengthen their cooperation for mutual benefit, contributing to solving global challenges.

Stuart said he was delighted with the positive trade outcomes since the UK–Vietnam Free Trade Agreement came into effect and thanked Việt Nam for supporting the UK’s accession to the CPTPP.

Welcoming Việt Nam’s commitments at COP26, the envoy said he would continue to assist and work closely with Việt Nam in realising them.

Stating that G7 countries had agreed to adopt a fair energy transition platform for Việt Nam, Stuart said further efforts would be made to promote more effective and substantive economic, trade and investment cooperation between the two countries. — VnExpress News