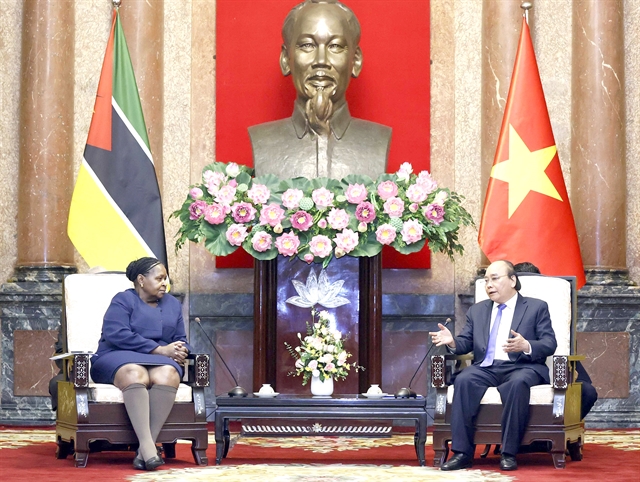 HÀ NỘI — Vietnamese State President Nguyễn Xuân Phúc held a reception on Wednesday in Hà Nội for the President of the Mozambican Assembly Esperanca Laurinda Francisco Nhiuane Bias, who is on an official visit to Việt Nam at the invitation of her Vietnamese counterpart Vương Đình Huệ.

President Phúc stressed said that the visit has made an important contribution to strengthening the relationship between the two countries’ parliaments and will boost traditional friendship, cooperation and trade ties.

Mentioning the Movitel telecommunications joint venture in Mozambique as a successful model that demonstrates the great potential of cooperation between the two countries, the President asked the Mozambican leaders to continue to pay attention and create favourable conditions for Movitel to operate and constantly innovate, to improve service quality, and expand mobile services to rural and difficult areas to better serve the people, society, and economy of Mozambique.

Currently, bilateral trade has only reached US$200 million, and the President suggested the two sides promote trade cooperation to a level commensurate with the potential and market size of each side, and support businesses to strengthen trade links.

With a large food export capacity, especially rice, Việt Nam will support Mozambique in ensuring food security and is willing to strengthen cooperation in health and education in relevant areas, and expand cooperation in culture and sports, President Phúc told the Mozambique leader.

The Vietnamese State leader also congratulated Mozambique on being elected as a non-permanent member of the United Nations Security Council for the term 2023-24 with a high number of votes, expressing his belief that Mozambique will fulfil this responsibility, making positive contributions to peace, security, cooperation, and development in the region and the world.

In the face of global difficulties caused by the COVID-19 pandemic, Mozambique has managed to maintain political stability, socio-economic development, and disease control, and kept resolute on its path to building a prosperous nation, affirming its role and the important international position of Mozambique in the African region.

The Mozambican parliament leader thanked President Phúc for the welcome, saying that she was very impressed with Việt Nam’s socio-economic development achievements.

She also thanked Việt Nam for its support during the pandemic and during Mozambique’s election run as a non-permanent member of the Security Council and looked forward to having Việt Nam share its experience in this capacity.

Informing the Vietnamese leader of the signing of a Memorandum of Understanding between the two parliaments, and her visit to the Hồ Chí Minh National Academy of Politics, the Việt Nam Agricultural Academy, and Việt Nam National Committee for Incident and Disaster Response and Search and Rescue, the Mozambican assembly president said that the discussions will serve as a basis for cooperation between the ministries, departments and agencies of the two countries in these fields.

She said she was glad Việt Nam has increased the number of scholarships for Mozambican students and supported Mozambique in socio-economic development, affirming Mozambique’s willingness to cooperate with Việt Nam in many fields such as diplomacy, economy, culture and education.

President Phúc said that Việt Nam attaches great importance to promoting traditional friendship and cooperation with Mozambique, and considers the country to be one of the key cooperation partners in Africa.

Furthermore, President Phúc expressed his delight to see that political relations in the Party and State channels have been well developed, creating a favourable foundation for economic, trade and investment cooperation.

In order to promote cooperation between the two countries in the future, the President proposed to strengthen the exchange of delegations and high-level contacts.

The President said that Việt Nam is willing to share with Mozambique its experience in working at the UN Security Council, actively implementing bilateral cooperation mechanisms, and continuing to actively coordinate and support each other at multilateral forums. — VNS