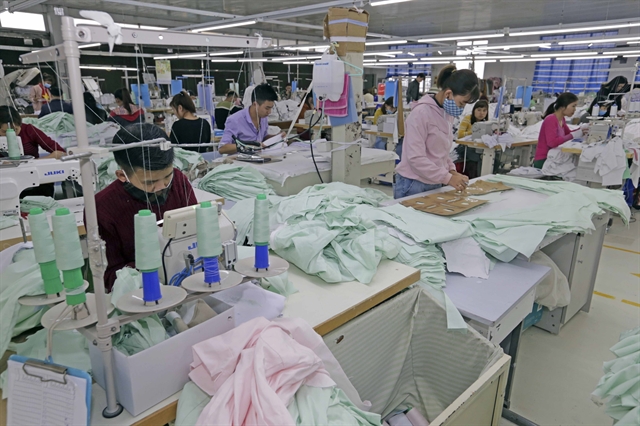 Workers of Hưng Việt Co in Hưng Yên Province make garment products for export. Việt Nam’s exports of textile and garments to the US hit $16.1 billion in 2021, up 15 per cent. — VNA/VnExpress News Photo Trần Việt

HÀ NỘI — Bilateral trade between Việt Nam and the US set a new milestone, hitting US$111.56 billion in 2021, up nearly $21 billion over the previous year, according to the General Department of Customs.

The impressive figure made the US the second trade partner having import-export turnover with Việt Nam reaching the $100 billion mark after China.

Last year Việt Nam’s exports to the US rose 25 per cent to nearly $96.3 billion, accounting for 28.6 per cent of the country’s total exports.

Last year, the country imported nearly $15.27 billion worth of goods from the US, mainly computers, electronics and components as well as machinery, equipment and parts.

Bùi Huy Sơn, Counselor of the Việt Nam Trade Office in the US, said that the two-way turnover, which exceeded $100 billion for the first time in 2021, was a very important achievement, especially given the pandemic, as well as the disruptions and disturbances in the supply chain and logistics activities.

Along with that, the active and flexible activities of two business communities continued to expand trade and investment activities, such as the resumption of direct flights between Việt Nam and the US, and the fact that Vietnamese businesses were increasing investment in the US to continue to expand their presence sustainably in the market.

To accelerate bilateral trade, Sơn called for continuous efforts from both sides, first of all in terms of the policy. The two sides should continue to maintain a dialogue channel, sharing information, and further enhancing mutual understanding so that they could detect and coordinate on problems favourably.

He also suggested businesses closely observe market developments, ensure the requirements of legal traceability, storage, information about documents and invoices for the origin of goods, so that they could coordinate and provide information when there were requests for investigation and verification by US agencies. — VnExpress News