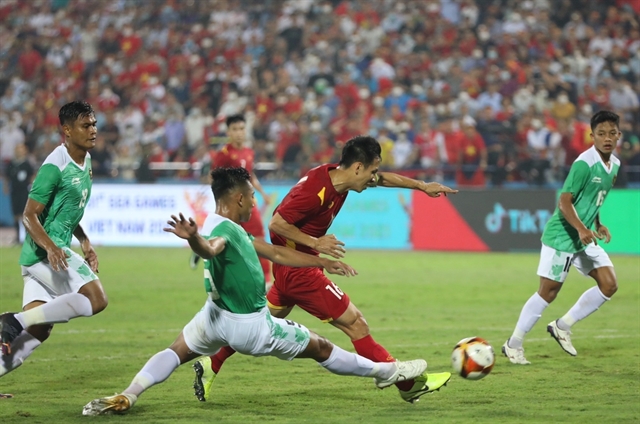 PHÚ THỌ — Việt Nam U23s got off to a flying start in their SEA Games title defence after a comfortable 3-0 win against Indonesia.

At a crowded Việt Trì Stadium in Phú Thọ, the Golden Star Warriors dominated the match, but had to wait for the second half to get on the scoresheet, with strikes from Nguyễn Tiến Linh, Đỗ Hùng Dũng and Lê Văn Đô seeing them home.

Việt Nam started the match with an attacking mentality, hoping for an early goal to gain control. The first chance for Việt Nam came 18 minutes in, when Vietnamese Golden Ball winner Hoàng Đức fired a shot from range, but the effort went wide.

Only three minutes later, Lý Công Hoàng Anh dribbled his way inside Indonesia’s box and crossed for Nguyễn Văn Tùng, but the pass was deflected, and the chance went begging.

On the 27th minute, Tiến Linh almost opened the scoring when the striker had a shot from outside the box. The deflected shot was dangerous but saved by keeper Adi Satryo.

Four yellow cards were brandished in the final minutes of the first half, with the Indonesian side committing rough challenges on key Vietnamese players. The first half ended goalless.

Coach Park Hang-seo brought on Nhâm Mạnh Dũng to replace Nguyễn Văn Tùng at half-time, and Dũng’s physicality created space for his teammates. Chances came for Tiến Linh and Hoàng Anh in the first two minutes of the second half, but the efforts were saved by Adi Satryo.

Linh did not have to rue his luck for long. In the 54th minute, Lê Văn Đô found Mạnh Dũng free inside the box, and the substitute crossed perfectly for Tiến Linh to easily tap in the opening goal for Việt Nam.

Although they had the lead, Việt Nam kept on pressing, and the Indonesian defence collapsed. In the 74th minute, a great one-two play between Mạnh Dũng and Hùng Dũng led to a great chance for the latter, who flicked the ball into the net with class and doubled the advantage.

A tired Indonesian side gave away control to Việt Nam and the men in red found chance after chance but were denied by the woodwork twice.

In the 87th minute, an effort from Lê Văn Xuân hit the woodwork, but the rebound went to Lê Văn Đô whose shot from outside the box went straight into Adi Satryo’s net, whose defence was frozen in place. The match ended 3-0, with the crowd at a packed Việt Trì Stadium in Phú Thọ roaring with joy.

With this victory, Việt Nam are now second in Group A, behind the Philippines who won 4-0 against Timor-Leste earlier. They will face the Azkals later on Sunday.

Meanwhile, the Vietnamese handball team also claimed victory by beating Singapore 2-0 in the qualifying round of the men’s beach handball event. — – VnExpress News